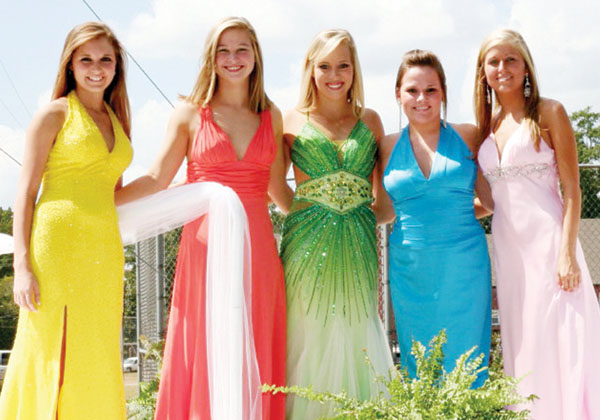 By Raycelia McIntyre
Special to The Gazette

Homecoming is always a fun, busy, exciting, exhausting and exile rating time for student, parents and faculty. This year was no exception at Marengo Academy. With so many things packed into one week, most everyone is running on very little sleep.
The elementary school starts early with the annual Round-Up. There were inflatables, hayride, cake walk and many more games that were free to the participants. At the end of Round-Up, everyone filed into the gym for the big pep rally and then outside to the bonfire. Due to the dry weather, they were unable to have a bon fire.
The weeks before Homecoming, the junior class starts the ball rolling by deciding on the theme that will be used throughout Homecoming week. This year, they went way back to “The ’80s.” They designed a must-have T-shirt, dressed up for Days of the Week, had a door decorating contest and brought back something to Marengo Academy that has been missing for years, the parade.
The students of both campuses always look forward to Days of the Week, with camo day, twin day, crazy day, etc. This year, there were new days to take their places. Day 1, Monday, was “Orange and White” day. Even the youngest of the Longhorns participated in this. Day 2, Tuesday, took everyone back to the movie, “Multiplicity” day. Here, each class had to see how many people that they could get to dress the same. The senior class won this contest with all seniors wearing painted T-shirts that adorned “Senior 2011” on the front and their names on the back. Day 3, Wednesday, was ’80s Day. The students asked their parents “What did you wear to school” to know how to dress for this day. Day 4, Thursday, had to be the most fun of all, the Color War. Each class was assigned a color and they had to see how much of that color that they could wear. The class colors were orange for the day care, K-4 and K-5; blue for the first grade and seventh grade; green for the second grade and eighth grade; yellow for the third grade and ninth grade; red for the fourth grade and 10th grade; purple for the fifth grade; black for the 11th grade; and pink for the sixth grade and seniors. Both of these classes have a large amount of boys, but pink did not stop them from participating.
For the elementary school, the class winner was Mrs. Creel’s second-grade class in green. The high school, the runner-up was ninth grade in yellow and the winner was the seniors in pink.
Each year, the pep club makes spirit posters for the football players and hangs in the gym. The junior class let this be one of the contests for the week. Winners of this were honorable mention Matt Wallace by Ciara McIntyre, third-place Jacob Gunter by Emily Fike, second-place Mason Stokes by Jessica Brock and winner Devin Walker by Ciara McIntyre.
Each class was asked to decorate their classroom door with something to go along with the ’80s. Taking third place was the eighth grade for “Smurf the Raiders,” winning second place was the 11th grade for “’KISS’ the Raiders Goodbye,” and the winner was the 10th grade with “Another One Bites the Dust.”
The next contest was “Clash of the Classes.” This contest was held at the annual Round-Up event. Each high school class competed against one another to determine the winner. This year’s winner was Mrs. Hasty’s eighth-grade class. They were rewarded with a pizza party and an hour lunch.
Friday was the big day: the parade, announcement of the Homecoming queen and the bal game. The festivities for the day started with the parade at 1p.m. The grand marshal for the 2010 Homecoming parade was Brady Creel, who made the route in the antique fire truck driven by his son, James Creel.
As tradition has it, the cheerleaders rode atop the big fire truck as they waved to everyone. After this, there were floats, carts and trucks to watch. Bringing an end to the parade was the Homecoming court float. This was a float of white that held not only beautiful colored dresses, but five beautiful young ladies with three in the running for Homecoming queen. Representing the sophomore class was Hollie Pritchett, for the junior class was Caitlin Moore and for the senior class were Jessica Brock, Ciara McIntyre and Jessica Poellnitz.
At halftime of the game, the winners of all of the contests were announced before the presentation of the Homecoming court. Jessica Brock was crowned this year’s Homecoming queen by the 2009 Homecoming queen, Shelby Mathis.
After the crowning, the senior cheerleaders were honored. They were Ciara McIntyre, Kimberly Jordan and Jaime Johnson.
The parade entrants were judged for best truck or golf cart and best float. The Pee-Wee cheerleaders took first place in the truck/golf cart category, with Coach Lindsey’s Fan Club winning second place and Denham Farms winning third place. In the float category, the senior football players won first place with “Glory Days,” while Marengo Academy Elementary took second place with “George of the Jungle” and the 10th grade won third place with “The Dukes of Hazzard.”
In the winning float, the senior players were dressed in their orange jerseys and had their father or uncle riding with them. Each senior graduates in 2011, and the dads or uncles held signs with the year that they graduated.
At the game, all senior football players served as captains for the coin toss.  After the coin toss, Linden mayor Mitzi Gates sang the National Anthem.
To finish the night, the Longhorns defeated SMCA with a final score of 28-12. After the game, the seniors posed for their last Homecoming picture before they graduate from high school.