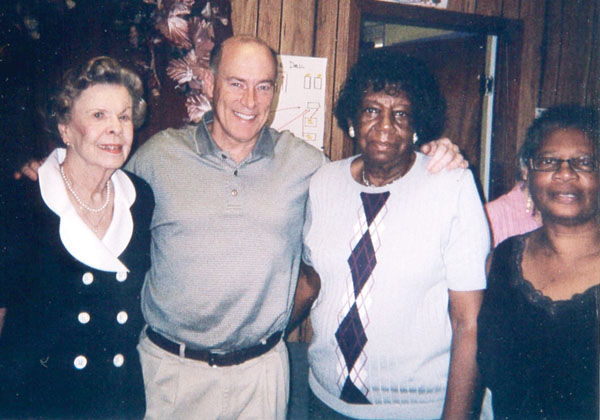 An old friend came back home to pay a visit on Thursday, as WCFT-TV 33/40 meteorologist James Spann made a stop at the West Alabama Senior Center.
Spann was the owner/operator of former Demopolis radio station WXAL from 1986 to 1989. He began his career in TV meteorology in 1978 at WCFT. He has gone through some changes in his job location, but has been working at WCFT in his current position since 1996.
“We lived here in the mid-80s; I was very young, in only my late 20s,” he said. “I had been doing television weather for almost 10 years, oddly enough. I was transferred to Dallas, Texas, by the station in Birmingham, Channel 13, and this (buying the radio station) was our way of coming back home.
“I owned the station with Dave Baird, who is our news anchor at 33/40, and Tom Stipe, who produces the University of Alabama sports networks.”
Spann treasures the time that he lived in Demopolis, three short years that influenced his life.
“I made some relationships that were very important to me in terms of developing my character,” he said. “I learned a lot about the way you treat people. There is no doubt that I needed to be here for those three years.
“I like to drive the roads less traveled; I love small towns. I would live here in a heartbeat if it was something I could do, but it’s two hours from where I work. To me, this is a big town. A small town is a place like Octagon or Nanafalia. There’s just something about the quality of life. It’s a slower pace, and people seem to be a little happier.”
Treating people right is part of what Spann enjoys about meteorology: letting people know when severe weather is approaching, allowing them to take cover in time.
“The first time I ever saw tornado damage was the Brent tornado in 1973,” he said. “My hobby was ham radio in high school — and it still is today — and we were one of the first teams in Brent, and we saw some horrible things. The next year, in 1974, they sent me to the hospital in Jasper to set up a communications station there. I saw some of the most horrific wounds.
“I think the purpose of my being here is to help people during severe weather. Now, I like to think that everything is a well-oiled machine. We try to be out there on the leading edge, and it’s a different world today. Most people now don’t get warnings first on television or radio; they get it on Facebook! There’s a good chance we can reach people that way now. There’s always a challenge, and I love a good challenge.”
Spann said that he enjoys being a judge at the Miss Christmas on the River pageant.
“First of all, it’s the first Saturday in October; that’s fall,” he said. “It’s starting to cool down, and that drive — I like to take a different way every year. It just lets me think about where I’ve been over the last year and where I’m going; spend a little time with God.”
James Spann is one of many people who came to Demopolis and lived here for a few years and left, but still took a little bit of the town with him. He works in the city, but this is the place he comes to for relaxation and fellowship.