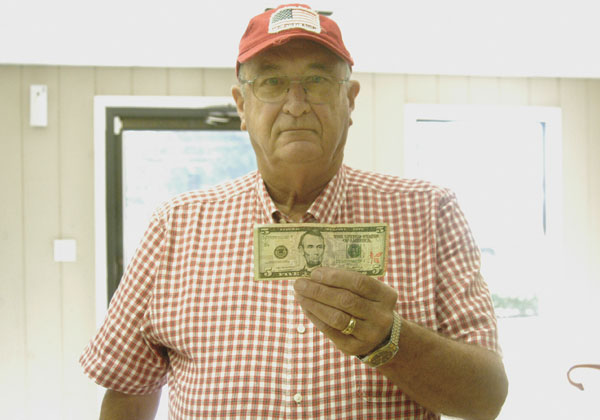 Denny Lewis shows a $5 bill ready to be tracked.

Have you ever put a message in a bottle and thrown it into the sea, wondering where it would end up? Or tied a message to a helium balloon and released it, never knowing if anyone got that message?
“Where’s George” is a Web site that is similar to the cast-off messages, except you are able to follow the trail of U.S. currency from Point A to Points B, C, D and beyond.
Hank Eskin, the creator and developer of the idea, tells participants that this is not a get-rich-quick scheme for him to take advantage of.
“It was created to simply allow people to track their currency around the country and the world,” he writes on the Web site. “The point is to have fun tracking your dollar bills and interacting with thousands of other fun and interesting people.”
To take part in the “Where’s George” fun, go to the Web site www.wheresgeorge.com and sign up for a free user name and password. After that is confirmed, people are able to track currency that has been entered into the Web site’s database or enter their own currency and follow where it goes.
Denny Lewis is one of several local people taking part in “Where’s George.” He got involved by finding a bill with the Web site stamped into the edge of the bill.
“I used to write on the back of my bills ‘Demopolis, Alabama,’” he said. “I never did hear anything from it. I entered it, and it took a while to get my first ‘hit,’ but once you start getting ‘hits,’ you really get fired up about it.
“I go to Meridian and get brand-new dollar bills, but I do old bills, too. I bought little stickers out at Walmart, and I stamp it on the bill and I color that in. When I watch TV, I do things like that, and I put the Web site on the back.”
“Where’s George does not encourage people to deface currency, but it points out that “defacing currency” is defined as making currency unfit for reissue.
“Where’s George” keeps track of bills by people going online and letting the Web site know that they have seen the bills floating in circulation. That way, you can track the bills as they make their natural way to wherever they go.
The site also ranks each county and state by the number of bills it has entered. Marengo County ranks 21st in the state of Alabama.
“I write on there, ‘Please give me a ride to Vermont,’” Lewis said. “I need Vermont to complete my 50 states. People can also contact you online and tell you about the bill, about what it was used for and so on.”
Lewis said he had bills that have gone to Alaska, Hawai’i, Guam, Mexico and Canada.
The adventure of sending something “out there” is to see if someone receives it and how far it goes. “Where’s George” follows currency across the country and around the world, connecting people through the spending of money.