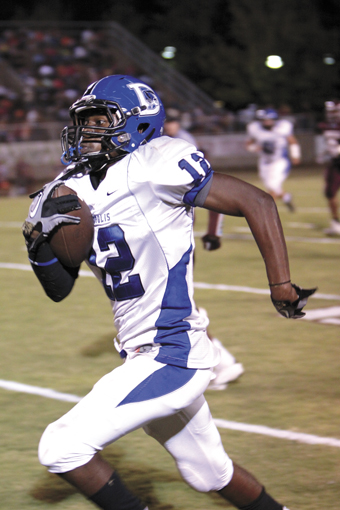 After a tough loss on the road at rival Thomasville, Demopolis returns to region play this week when it challenges Paul Bryant for the first time in school history.

Paul Bryant, which started its program in 2003, is 18-57 over its brief history but has seen success since dropping down from the 6A level this season.

“They play the heck out of some football,” Demopolis head coach Tom Causey said of a team he believes to be a legitimate threat to make the playoffs out of Class 5A, Region 3. “They are very athletic and they are well coached and they are real good at competing on every down.”

Paul Bryant sits at 3-2 over all, but has lost only one region game. That setback was a 52-41 loss to region power Greenville.

Demopolis’ two losses have come against ranked foes Thomasville and Briarwood Christian. Both those games have exhibited the inexperience of a Demopolis roster that will likely be tested mightily Friday night.

“We’ve got 47 new players on our football team that have not been in (the Demopolis High football field house) until this year,” Causey said. “A lot of these guys have never practiced.”

The Tigers have seen significant playing time from a handful of new faces, including first-time varsity players Matt Barger and Terrance Charleston as well as John Essex transfer LaVaughn Terry. The DHS defense has also seen contributions from kicker-turned-linebacker Spence Overstreet and center-turned-noseguard Delanee Reid. With all of those new faces, Demopolis has yet to discover the chemistry that helped guide it to a 5A state championship a season ago.

“We’re taking care of today,” Causey said. “If you just went into Hyundai manufacturing and you put 47 new people on the line, that is going to affect chemistry. We’ve got to find a way to get better and start believing in ourselves and what we’re doing.”