France goes all out 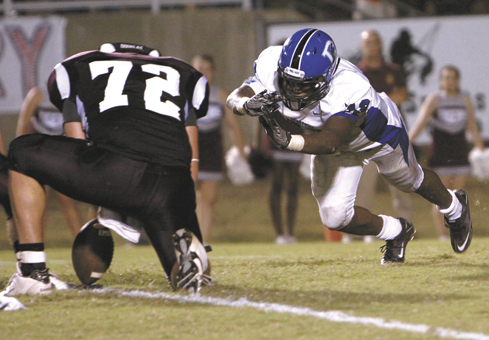 Michael Clements -- David France lays out to block a kick against Thomasville.

After spending most of his career contributing on special teams and in a reserve role at safety, senior David France has found a way to make a major impact over the last two weeks.

France, a safety in the Demopolis defensive scheme, played wide open in the Tigers’ win over Wilcox-Central two weeks ago. Often walking up closer to the line of scrimmage and acting almost as an extra linebacker, France frequently found himself around the football in that contest. He finished the night against the Jaguars with 10 total tackles, a forced fumble, a pass deflection and a fumble recovery for the first touchdown of his varsity career.

“It was awesome,” France said of putting six points on the scoreboard for the first time. “It was so awesome. I finally got one (touchdown).”

For an encore performance France, who was a finalist for this week’s Alabama Sports Writers Association Defensive Player of the Week Award, recorded 10 more stops against Thomasville while forcing his second fumble in as many weeks. This time, France made his presence felt on special teams by blocking a field goal at the end of the first half and an extra point attempt in the fourth quarter.

“Never had field goals blocked, that’s for sure,” Demopolis head coach Tom Causey said of a feat his players have rarely accomplished. “It’s a heck of a team effort. Guys have got to clear out and he did. And he’s got to have the courage to go do it and he did.”

“I knew I could do it,” France said of the designed play. “I believed in myself and I timed the snap. I kept going for it. I missed another I should have had.”

For France the success has come relatively quickly in his only season as a starter. He has served as a backup to Demopolis alums Bryan Taylor and Anthony Hardy over his previous two seasons and said he is still learning from that tandem.

“It’s way different than you thought,” he said of being a starter and leader on a team still searching for its identity. “I was behind Bryan and (Anthony) and I looked up to them. Now, before the games start, I always get a text from (Anthony) and Bryan telling me to step up.”

While he still has some ground to cover in learning the intricacies of his position, France has certainly found a way to step up over the last two weeks while leading the Tigers with 20 tackles during that stretch.

“It’s his senior Year and he is playing like it. I think he realizes he is down to the last five weeks of his career,” Causey said. “Obviously he has grown up or he wouldn’t be making the plays he’s making. We’re expecting more growth out of him.”