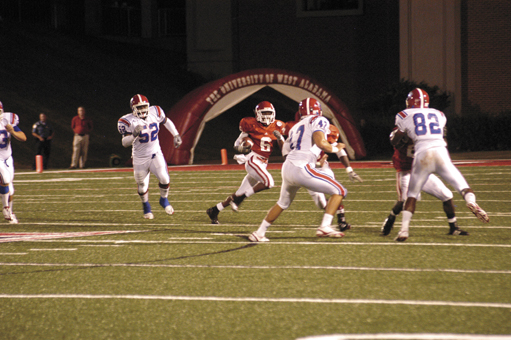 LIVINGSTON — West Alabama will look to go 2-0 in Gulf South Conference play against a familiar foe Thursday night when it travels to face Delta State University.

“They went to Valdosta State and beat them,” UWA head coach Bobby Wallace said of the Statesmen. “I think they are pretty good.”

The Statesmen enter the game at 3-1 over all with a perfect 3-0 record in GSC play. and a balanced offense of which Wallace is wary. That offense is headed by redshirt junior quarterback Micah Davis, a player whom Wallace knows very well.

“They’ve got a quarterback in Micah Davis who was actually born when his dad was working for me at North Alabama,” Wallace aid. “So I’ve known Micah his whole life. We offered him out of high school and, in then end, he decided he was going to (Coplah-Lincoln Community College) to play for his dad.”

Wallace had one more shot at procuring the services of Davis but already had a quarterback in the fold in the form of Deon Williams, who has since vaulted himself into the West Alabama record books as one of the most prolific offensive players in school history.

As good as Davis has been over the course of the first four games while passing for 1,054 yards, it is still the running game that dictates the success of Delta State football.

“Even though Delta State has been throwing the ball pretty good, they did run for 315 yards last week Henderson state,” Wallace said.

Delta State’s ground game proficiency is largely due to the work of 215-pound running back Trevar Deed, who has amassed 327 rushing yards while averaging 4.5 yards per carry through the first four games of the season.

“They’ve got a great running back, Trevar Deeds,” Wallace said. “He can dominate a game by himself. It’s hard-pressed to find anybody in this league better than he is.”

Despite Delta State’s ability to move the ball effectively through the air and on the ground, Wallace sees no need to alter his team’s defensive approach.

“You’ve just got to play well,” he said. “We’ve got to execute and make our plays when we can. It’s not like we’re outmatched. We’ve got great players too.”

The identities of those great players on the offensive side of the ball have long been known. It is only recently that the Tigers’ defensive leaders have begun to emerge.

Chief among those defensive playmakers are Gabe Poe and Vonzell Jackson, who rank first and second on the team respectively in total tackles. Jackson catapulted up that list last week against West Georgia when he recorded 13 stops and three sacks, pushing his team high sack total 4.5. Poe registered eight more stops last week to put himself at 33 on the season.

“Vonzell has stepped up and so has Gabe Poe,” Wallace said. “Those two are making a lot of plays.”

Thursday they will be called upon to make plays in front of a Cleveland, Miss. crowd that is sure to feature a DSU student section known to be rambunctious.

“Delta State has got a good student section that really turns out for their games,” Wallace said. “Being that is is a Thursday game, there won’t be many of them gone home for the weekend.”