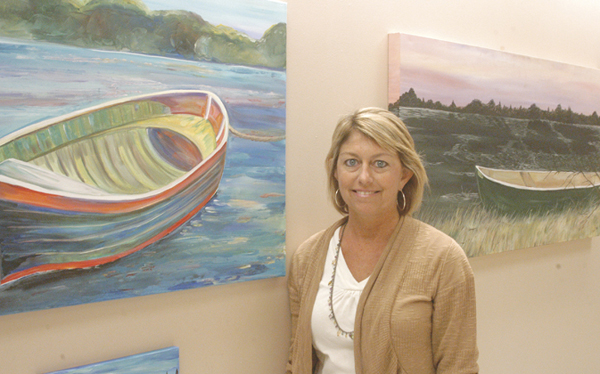 Bryan W. Whitfield Memorial Hospital has a new artist featured in The Exhibit this week as Jennifer Tate’s work now illuminates the hallways of the facility’s main building.
Tate’s work is the latest to become a part of the initiative, which has rotated artists, photographers and even quilters through its area on a quarterly basis for the last six years.
“The patients love it,” Chrissy Brooker, Director of Public Relations for BWWMH, said. “The employees love it. It really brightens the hallways. It is always so drab when one (exhibit) comes down.”
Tate’s work should provide a nice alternative to the drab as many of her nearly 50 pieces utilize an array of bright colors.
“I try to be happy,” Tate, the Director of the Demopolis Area Chamber of Commerce, said. “I’m not gloom and doom usually.”
Tate’s work features a number of distinctly Southern scenes including farm animals, hay bales, fish and some riverside relaxation. Tate said each piece is reflective of something from her life.
“Everything is stuff we either have or wish we had,” Tate said. “Everything is truly from our life.”
Recently Tate began experimenting with folk art and put together a handful of unique pieces that deviate from her normal use of paints on canvas. One such piece utilizes an old three-pane window as its backdrop.
“That was this summer when I was kind of bored,” Tate said. “I was into folk art there for a little bit.”
Tate said her method of choice is reflective of her lifestyle as much as the subjects of her paintings are.
“They are all mainly done with acrylics and oils on canvas,” Tate said. “I like acrylics because they dry fast and I do not have time to wait.”
Tate’s affinity for art dates back to her kindergarten days in North Carolina. Her affections for the past time led her to teach art in high school for 12 years. Now, her own work is on full display for the first time.
“Some of them are years old and some of them are a week old because I knew I had a lot of space to fill,” Tate said.
BWWMH will hold a reception Sunday from 1:30 p.m. until 3 p.m. to honor Tate and her contributions to The Exhibit.