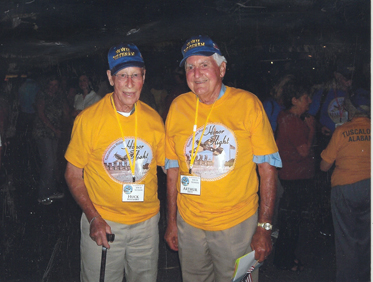 Arthur Hitt may have gotten out of the military more than 60 years ago, but the service he and close friend James David “Huck” Huckabee rendered to their country during World War II was recently appreciated again when the pair took part in an Honor Flight Sept. 22.

“We flew out of Tuscaloosa Airport,” Hitt said. “Then we landed in Baltimore and got on buses and went to the World War II Memorial.”

Hitt and Huckabee were two of a number of former United States soldiers who enjoyed the opportunity to visit Washington D.C. and a number of sites including the Vietnam Memorial and the Iwo Jima Memorial.

“That was just something to see,” Hitt said. “We got to see the changing of the guard at the (Tomb of the Unknown Soldier). I’m really glad we got to see that.”

Prior to the trip, Hitt had never been able to see the capitol city of the nation that drafted him into its military at 18 years of age, sending him into a service career that saw him stationed in Berlin, Germany from Dec. 1945 until to Dec. 1946.

“We were trying to catch SS troopers trying to slip out of Berlin,” Hitt, 83, said of his military experience.

Now, some 65 years after his military career began, Hitt has another memory to add to a lifetime full of them and one more story to tell.

“We had a tremendous crowd to welcome us when we got back. I was choked up a little,” Hitt said. “That was the first time I’ve even been to Washington. When we landed in Baltimore, they had a welcome committee there for us.”

But as much as Hitt enjoyed the trip, he indicated that it would not have been the same without his 91-year-old counterpart, Huckabee.

“I knew Huck would like to go. He was just flabbergasted with it,” Hitt said. “Huck and I have been friends for 60-some-odd years.”