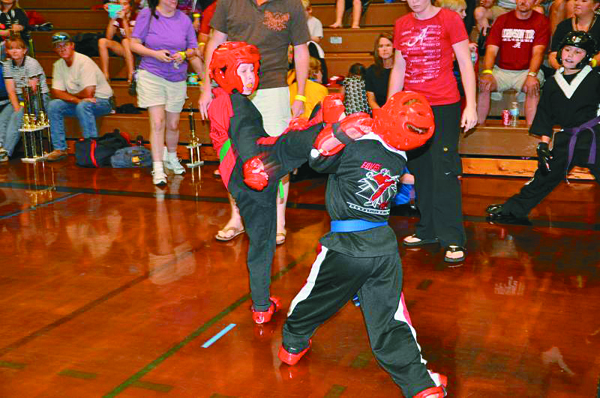 A team of four Marengo County residents brought home 12 trophies from the forms, weapons, point sparring, kickboxing and grappling competition that has been hosted by AKC in North Alabama for more than two decades.

According to instructor and coach Jay Russell, the victories at the state finals now insure that the team of taekwondo and jiu jitsu practitioners will bring home several state championships in various age groups and experience levels.

Russell said that the announcement of state championship winners will not be official until the AKC banquet in Huntsville in November. Just prior to that event, cumulative points for placing at tournaments throughout the year will be tallied and winners will be finalized.

“We are extremely proud of our team members for all the hard work and training they put in to make these championships possible,” said Russell.

“We’re also excited that we are now winning state titles in grappling divisions as well as the stand-up striking arts.”

Russell said the Ross Martial Arts team will be expanding their competitions in 2011 as they hope to compete in several different circuits.

“We will certainly be competing in some Mississippi Karate Association tournaments next year,” commented Russell.

“We also want to do more grappling tournaments as we have built a bigger team of competitors for those divisions.”