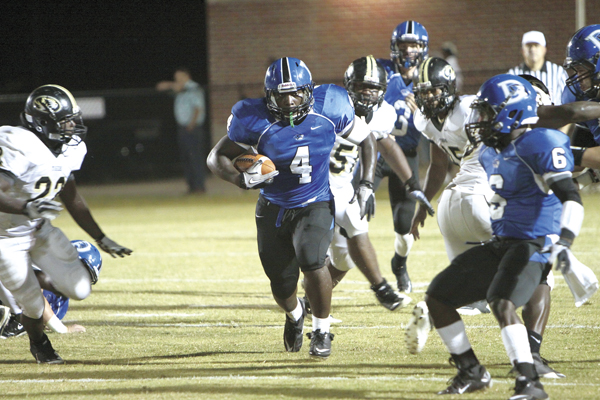 Demopolis has never won a region championship as a Class 5A team. This year could be the first for the Tigers if they can win one of their final two region games. For Demopolis head coach Tom Causey, locking up the region crown ó and the playoff benefits that accompany it ó Friday night against Brookwood is preferable.

However, Causey knows that task will not come easy as his Tigers are readying for a Brookwood team that not only gained momentum by downing Selma last Friday night, but also put itself squarely back into the playoff picture.

“They beat a good Selma team,” Causey said. “I think everybody in our region has improved. They have a plan offensively and defensively. They are big and physical. They have just enough speed at the skill positions.”

While Brookwood will matchup solidly against Demopolis in terms of personnel, it may be the intangible factors that determine the results Friday night. Demopolis is fresh off its biggest win of the season and heading on the road to face a team whose season scope has changed entirely with last week’s win.

While Causey’s team will likely have its hands full with a motivated team, the head coach has been encouraged by the improvements the Tigers have made over the last two weeks.

“Executing our offense for sure,” Causey said of one area where his team has bettered itself. “We didn’t sputter and shoot ourselves in the foot (against Greenville) the way we did the week before (against Paul Bryant). We didn’t have any turnovers.”

The Tiger offense has found help from the occasional use of senior Kiandre Adams and the return of previously injured receivers Logan Holley and Darius Stewart.

“Kiandre is the fastest guy on our football team and if we can get him in the game offensively, it helps out even if he is not involved in the play,” Causey said of Adams before turning his attention to Holley and Stewart. “They are starting to get consistent in practice and they are going to get consistent with their play.”

The Tiger offense has improved considerably since the beginning of the season, but the greatest turnaround has likely come from the defense. While the unit is still not the flashy, shutdown group it has been at times during previous season, Causey has seen subtle and important changes from the group.

“Defensive it didn’t look any better if you just look at the numbers (from the Greenville game), but we got stops when we had to have stops,” Causey said.

The Tigers’ defense, while consisting of eight seniors, is still largely inexperienced due to lack of playing time over the years. Causey indicated the group has come a long way since the beginning of the season, but that the unit is running out of time to get better.

“We’ve got to get a sense of urgency from our players and our coaches,” Causey said. “We’re running out of weeks to play.”