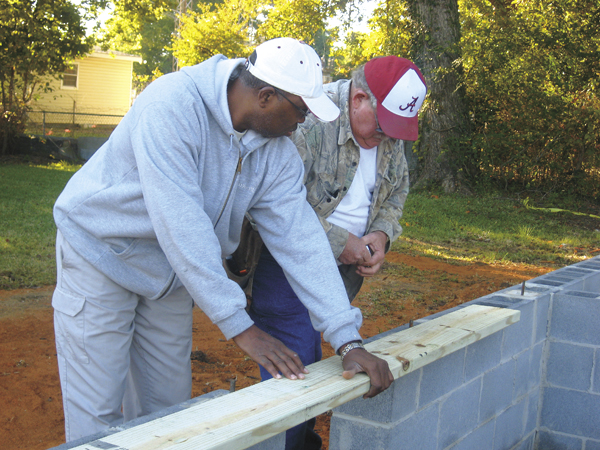 In a time where new home construction is near record lows one local group is working hard to raise the roof. And a few donations.

Demopolis Area Habitat for Humanity has another project underway, as construction on the house on South Fulton Street began on Sept. 16. The property was donated by Alex J. Roberson in August 2008, and the house will go to Carolyn Jackson.

Freddie Charleston, who has served as president of the local chapter since 2003, said he expects the home to be completed in roughly six months. However, that time frame will likely move to accommodate weather, donations and their ability to purchase the supplies needed for construction.

“In these economic times, donations are tight,” he said. “We’ll do as much work as we can as long as the funds are there and then we’ll try to raise more funds or get some supplies donated.”

Charleston noted that the race was on to frame the home first, which would afford volunteers the opportunity to work on the inside of the home as colder weather begins to set in.

Aside from limited funding, Charleston said one of the largest hurdles his group faces comes from a less than steady stream of volunteers.

“What I’d really like to see is some of the local churches get involved with us,” he said. “This is a great opportunity to improve the quality of life of some of our citizens by giving them a place to rest their head.”

Currently, Charleston said the majority of his volunteers are the Habitat board members and, occasionally, those who hear about the construction through the grapevine.

“If you’ve got enough funds, enough volunteers and the weather cooperates, you can build a Habitat home in a few weeks. Maybe a month,” Charleston said. “Some of the larger organizations in some of the bigger cities, can do it in a weekend.”

The Marengo volunteers presently work from 8 a.m. to noon every Saturday. Those wanting to volunteer to help the Demopolis Area Habitat for Humanity or make a donation can call (334) 289-1177.

Donations can also be mailed to: Demopolis Area Habitat for Humanity, P.O. Box 1203, Demopolis, AL 36732._DAHH is a 501(c)3 organization, and donations are tax-deductible.