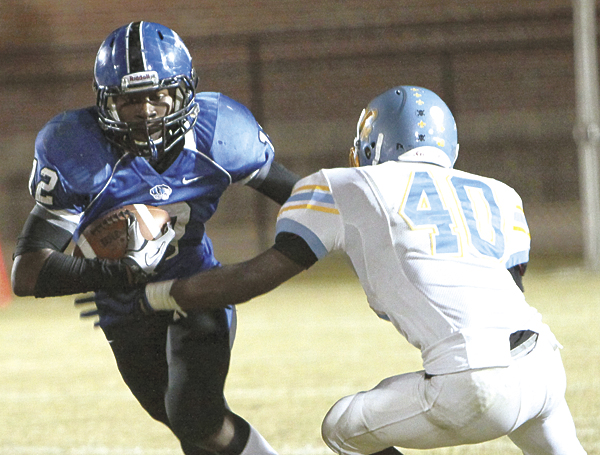 “James has been stepping up big for us all year long,” Demopolis head coach Tom Causey said. “He became the primary guy for us tonight.”

Stat sheet staple DaMarcus James obliterated the Selma defense for 68 yards and a touchdown on four carries before leaving the game midway through the first quarter with an injury. He returned in the second half for three carries but limped off the field, leaving the bulk of the offensive work to his supporting cast.

“I just had to dig down deep and come up big for him,” Wilson said of his senior running mate. “He is the heart and soul of the team and sometimes we’ve got to come through for him.”

That advantage remained intact until the 8:20 mark in the fourth quarter when Wilson scored on another one-yard run, capping a drive in which he accounted for 64 of his team’s 78 yards. Cameron Fendley’s extra point kick extended the lead to 20-7.

The two possession lead lasted exactly one minute of football time as Selma answered back with a 59-yard touchdown pass just four plays later. The scoring strike followed an apparent Demopolis interception that was negated on a pass interference call which drew the ire of the Demopolis sideline. The Saints accepted four pass interference penalties against the Tigers, who were flagged a total 13 times for 130 yards on the night.

The Selma bomb, which also incurred a pass interference penalty that was quickly declined, put the Saints down 20-14 with plenty of time remaining on the game clock.

Wilson teamed with Tre Dotson for what appeared a promising drive before a holding penalty snuffed the Tigers’ momentum and ultimately forced a punt.

The Saints picked up a quick five yards before tossing the ball to the flat where LaVaughn Terry closed quickly for his team leading eighth tackle of the night. On third down the Saints went to the air again, this time finding the waiting arms of DHS linebacker Matt Barger for a critical interception.

“We ran quarters. We were looking for the deep ball. I saw No. 2 go in motion and he seems to be their playmaker,” Barger said of the play. “Coach told me I needed to get a little wider in my zone. I backpedalled and the ball ended up in my hands somehow.”

“The defensive interception was really big,” Causey said of the play that gave Demopolis possession back at the Selma 28 with just over two minutes to play.

The Tigers converted one first down and appeared to convert a second to ice the game before a measurement gave the ball back to Selma on downs with 6.5 seconds to play.

“Neilson has worked extremely hard all year long,” Causey said. “He’s a really talented athlete. We’re proud to have him on our football time. He is a winner.”

The Tigers finished with 380 of their 432 yards of total offense on the ground. James finished the night with eight carries for 85 yards and a touchdown while Wilson led the way with 256 yards and two scores on 33 carries.

Demopolis wraps up its regular season Thursday when it hosts Class 6A Hillcrest-Tuscaloosa (8-1).