Demopolis fumbles its way to 34-14 loss 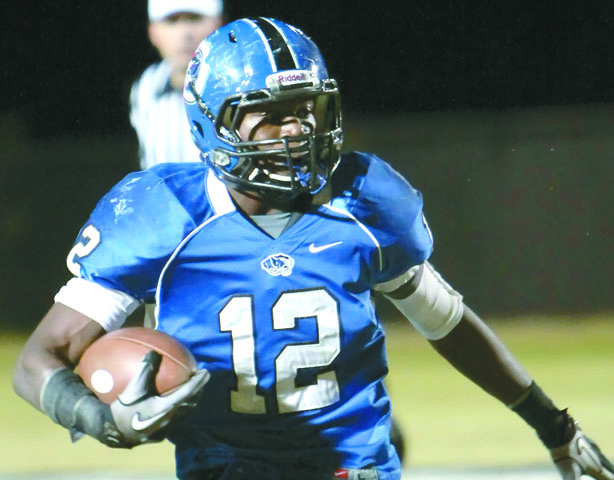 Demopolis (7-3, 7-0) committed the first of its five turnovers on the opening kickoff Thursday, fumbling away all the good feelings of Senior Night early in a 34-14 loss to Hillcrest-Tuscaloosa.

After the Tigers fumbled the opening kickoff, their defense handed the ball right back to them when Deonte Washington knocked the ball loose and LaVaughn Terry recovered it at the DHS 3. The good fortune was short-lived as the Tigers had a bad exchange in their own end zone just two plays later. Hillcrest recovered the fumble for a touchdown, a 7-0 lead and all the momentum for which it could ask.

“We came out flat as a pancake,” Demopolis head coach Tom Causey said. “It looked a lot to me like it did last year when we played Thomasville.” That game was also on a Thursday night in the final week of the regular season and saw the Tigers struggle physically in a double-digit loss.

The Tigers went three-and-out on their second possession of the game before watching the Patriots march 64 yards in seven plays to stretch the lead to 14-0.

The Tigers’ big play of the night came on DaMarcus James’ only run of the game. The injured senior blasted eight yards on first down to ignite a Demopolis drive before returning to the sideline where he would stay the remainder of the evening. James Wilson followed that carry with a 38-yard run and Tre Dotson answered with a nine-yard bolt. Two plays later the Tigers were on the scoreboard with a four-yard touchdown dash by Wilson to cut the deficit to 14-7 after Cameron Fendley’s extra-point kick.

The Tigers had a chance to even the game after forcing a stop and receiving the benefit of a 15-yard punt. But a 14-yard Dotson run proved to little effect after a false start moved the Tigers back before they committed their third fumble of the first quarter one play later.

The Patriots methodically moved 50 yards in 11 plays and drained the second quarter clock before stretching the lead to 21-7.

The Tigers’ woes continued on the ensuing possession when the Patriots picked off a pass. Demopolis’ last drive of the first half lasted 14 plays and covered 53 yards before stalling at the Hillcrest 21 and setting up a 38-yard field goal attempt that fell just short.

Hillcrest offered the Tigers more of the same in the second half, going 82 yards on 13 plays to open the third quarter with a drive that stretched the lead to 28-7.

The Tigers countered with a six-play, 75-yard drive that culminated with a 39-yard Wilson scoring run and moved the score to 28-14 with 3:31 to go in the third quarter.

The Tigers did not get the ball back in the third quarter and ran only eight in the fourth and final period, finishing the second half with a total of 14 offensive plays.

Wilson proved the vast majority of the Tiger offense, totaling 174 yards and two touchdowns on 21 carries while also catching one pass for 17 yards to lead the receiving corps. He accounted for 191 of the Tigers’ 224 total yards.

The Tigers begin the Class 5A state playoffs next week when they host Fairfield.

“We’ve got to get a heck of a lot better mentally between now and next week,” Causey said.