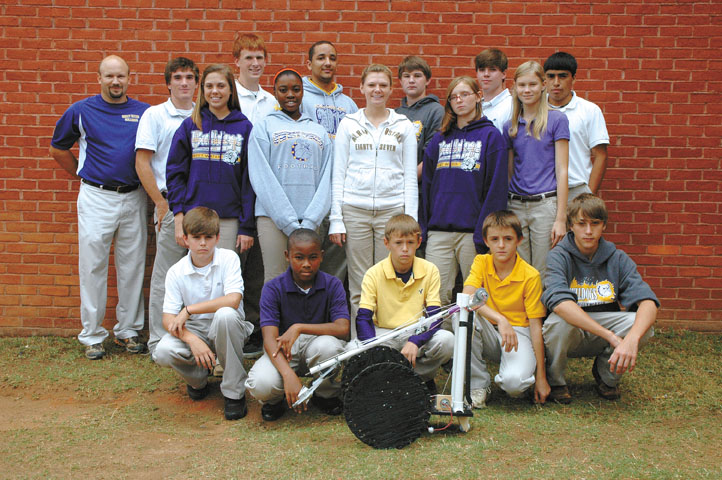 SWEET WATER — More than a dozen students will make the trip to Mobile Saturday for the Jubilee BEST Robotics Competition. The occasion will mark only the second time the Sweet Water Robotics team has participated in the event.

Last year the squad earned Rookie Team of the Year distinction after finishing seventh out of 26 schools in its region.

“If we come in seventh this year, we’ll make it to regionals, which is in Auburn,” Kevin Byrd, team sponsor, said.

That task will likely prove a tall one for the fledgling program as it is one of 31 teams entering this year’s competition in what many regard as the most competitive of regions.

“There is no region better than Mobile,” Byrd said. “The national champions came out of there last year.”

In Davidson, last year’s national champion, Sweet Water finds itself in competition with a school that boasts its own engineering department.

“We are by far the smallest high school in (the competition),” Byrd said.

The small, rural school in south Marengo County launched the program last year as part of its focus on expanding its technology center.

“We have to learn all kinds of things they normally don’t get in school,” Byrd said of the various academic areas and skill sets a team must utilize in order to put together a robot for the competition. “We do a lot of design software and computer programs.”

The Sweet Water team, like those it will compete against, started with a box of supplies and parts it was provided by competition organizers. The container included plywood, PVC pipe and a number of small items. The only costly contents in the container were the $600 worth of electronics the robot required.

Each competing team received the same materials and each was tasked with designing and building its own unique robot.

“There is so much to it,” Byrd said of the various phases of the competition. “There is a marketing competition where you go and market your robot to companies in Mobile. We’ve pulled out of that one because there is just no fiscal limit on what you can do.”

Sweet Water’s team has chosen to focus all of its energies on designing and building its robot, which will be put to the test on the course Saturday.

“It fits all of the parts of the S.T.E.M. we are trying to teach,” Byrd said. “It fits science, technology, engineering and mathematics. We are able to work it into their schedule with their electives.”

As much as the Sweet Water students have learned while putting together the robot, Byrd indicated the difficult part of the competition still lies ahead.

“You would not believe the environment,” he said of the atmosphere his team will encounter when it arrives at the University of South Alabama’s Mitchell Center. “There will be cheerleaders and bands. They pipe in sound and there are laser light shows.”

The competition, which offers not shortage of fanfare, can be difficult on new teams, especially members charged with driving their squad’s robots.

“It actually helps to have kids who have been involved in competitive sports because the pressure is not nearly as bad,” Byrd, whose team is comprised primarily of student-athletes, said.

This year’s competition has also afforded the Sweet Water team the chance to get a jump on next year’s event. Each school is responsible for returning the electronics it receives. However Sweet Water, thanks in part to Pritchett Logging, has raised enough money to purchase its electronics and will be able to practice over the next year.