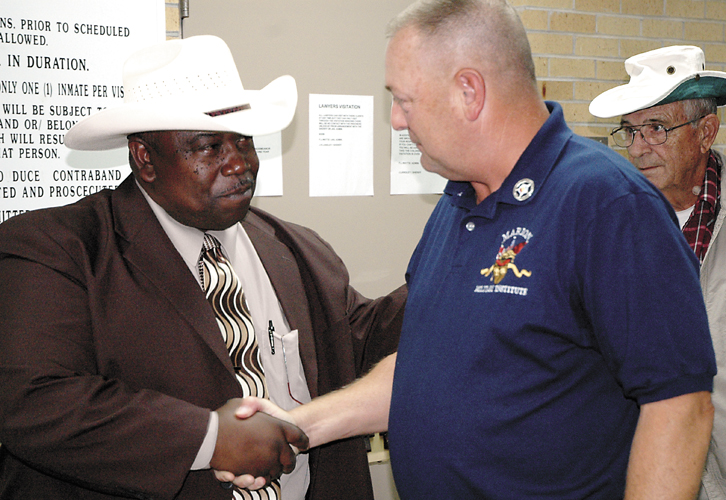 An election night that had not generated much buzz in the weeks leading up to zero hour got anti-climactic somewhat quickly last night.

While a number of statewide races saw early declarations, 25 of 27 Marengo County precincts were in before Republican candidate Bobby Duke conceded the sheriff’s race to Richard E. “Ben” Bates, who earned the Democratic nod over Randy Sanders in the June primary.

“Everybody kept telling me I was going to win it,” Bates said just moments after shaking hands with Duke, who garnered 3,765 votes.

Bates, who tallied 5,098 votes countywide (57.49 percent), credited the loyalty of his supporters with providing him the opportunity.

“Outstanding,” he said of the support he received. “One particular incident where I didn’t have money to pay anybody to go put my signs up; one man sold collards out of his garden to pay for his gas so he could go put my signs up. That showed me pure motivation.”

Bates indicated he hopes to make the most of his term, a plan that he said will begin by developing the relationships between the sheriff’s department and the county as a whole.

“I would like to start a better relationship with the sheriff’s department and all the communities in the county,” Bates said.

Bates was just one of 29 Democratic candidates to earn favor with the majority of Marengo County voters, 3,882 of whom voted straight Democratic Party tickets Tuesday night. The lone Republican to win an election in Marengo County was Jim Main, who ran unopposed for Court of Criminal Appeals Judge.

Polls closed at 7 p.m. sharp across the state and by 7:15, U.S. Senator Richard Shelby had sewn up his fifth term in the United States Senate, despite failing to carry Marengo County.

“I am deeply grateful to the people of Alabama for electing me to a fifth term in the U.S. Senate. I will continue to listen to their concerns and fight for their interests as the Senate addresses the serious challenges our nation faces,” Shelby, who lost Marengo County by a mere 105 votes, said in an official statement.

By 8:30 p.m. Republican nominee Dr. Robert Bentley was declared the winner in the race for Governor of Alabama. Bentley, a physician from Tuscaloosa, trounced Democratic nominee and Alabama Commissioner of Agriculture and Industries, Ron Sparks. Locally, Sparks took the majority of the votes with 5,080 (57.15 percent) of the 8,972 ballots cast in the county.

Democratic nominee Terri Sewell defeated Republican hopeful Don Chamberlain in what turned out to be a historic election to the United States House of Representatives.

Congresswoman-elect Sewell made history by becoming the first African American woman elected to Congress in Alabama history. Sewell, who earned 4,983 (57.09 percent) Marengo County votes, will fill the seat being vacated by Artur Davis, who did not seek re-election to the position.

“Words cannot truly express my gratitude for all that you have done over the past 20 months,” Sewell said. “Together, we ran a campaign to be proud of and just now the press has called the election in our favor, with unofficial results of 73 to 27 percent. From the bottom of my heart, I want to thank you for the time, energy, money and prayers you have poured so generously into this campaign. Without you, we could not have made history tonight or have had this opportunity to bring a vision for real progress to Washington.”

In the race for Lieutenant Governor, Jim Folsom Jr. and Kay Ivey went down to the wire statewide. However, Folsom was the clear favorite among Marengo County voters, having gotten 5,643 (63.86 percent) of the vote.

Greg Griggers remained District Attorney for the 17th Judicial Circuit with an unopposed victory that saw only 46 write-in votes. District Nos. 1 and 3 saw Fred Armstead and John Crawford, Jr. win in unopposed races while Michael Thompson defeated Independent Thomas E. Rodgers by earning 75.39 percent of the vote to win the seat for District No. 5.