A Tiger inside and out 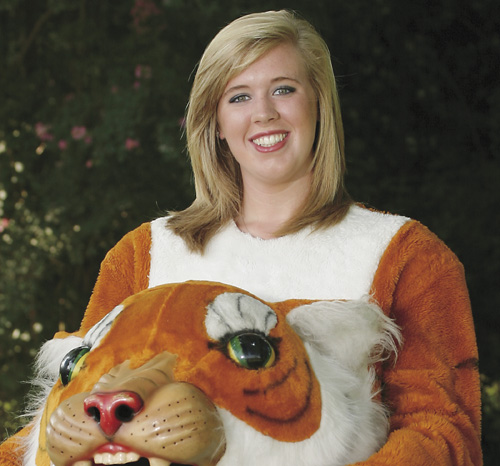 One day in the not-too-distant future there will be a drastic change on the sidelines of Demopolis High School football games. Most fans anticipate the departure of mainstays like quarterback Ben Pettus and running back DaMarcus James. But what most probably do not realize is that Demopolis’ beloved tiger is graduating.

For every game in the Tom Causey era, Jennie Hurst has donned the outfit, playing the role of Demopolis High School’s mascot.

“I had done cheerleading before and I knew that I wanted to be on the field somehow,” Hurst, a senior currently sitting in the Top 10 percent of her graduating class said of her decision to become the mascot for Demopolis Middle School during her eighth grade year.

“I knew that I didn’t want to be a cheerleader and I wasn’t going to play football. Besides, they probably wouldn’t let me. So I decided to be the mascot. And it fits my personality better.”

Hurst’s decision to be the mascot for Demopolis Middle School led her to accept that same role during her freshman year at DHS.

“Being on the field during football season and just being a part of everything, but nobody really knows about it. It is kind of behind the scenes,” Hurst said of her experience in the tiger suit. “It is kind of cool to be able to say I’m the mascot for the high school. It is kind of an image of the team and the school.”

Playing the iconic role for her school Hurst has kept herself occupied on the sidelines for the last four years.

When she is not working to keep the crowd entertained, Hurst is usually playing with children or harassing various sideline staples like stat keeper Jay Russell or DHS principal Leon Clark.

“A lot of energy. A lot of spontaneity,” she said of the necessities of filling her chosen role adequately.

The suit has created for the fun loving Hurst a kind of alter ego that allows her to become something of a caricature of herself.

“I’m not really serious a whole lot, so it works,” Hurst said.

“Whenever I am in the suit, I can dance however I want to. I wouldn’t necessarily go up to Mr. Clark or some old man and rub their head normally, but I can in the suit. I have a lot more freedom in the suit.”

For Hurst, the memories have piled up quickly.

There are the moments spent doodling on the notebooks of reporters covering the game, thrilling the youngest of Demopolis fans and amusing the older ones. There was the hard-to-swallow playoff exit against Carver in 2008 and the jubilation of watching her classmates capture the Class 5A state championship in 2009.

There for all of it has been Hurst, inside the tiger suit, on the sideline and perfectly at home.

“I know everybody,” she said in reference to what she will miss the most after her last day as Tiger. “Being pretty comfortable and knowing my surroundings and what my boundaries are.”

As much as she is going to miss Demopolis High School and the Friday night atmosphere at Tiger Stadium, the home she leaves behind will likely reciprocate the sentiment after her departure.

“It is going to be wide open in both yearbook and the mascot position,” cheerleading co-sponsor and yearbook advisor Leslie Gibbs said of the impending life after Hurst, who serves as editor of the Demopolis High School annual.

“It is scary. I don’t even want to think about who is going to do those jobs next year.”

Hurst, the daughter of Harris and Traci Hurst, is enrolled in two advanced placement classes, boasts a 4.0 grade point average, is a Marengo Maid, participates frequently in DHS theater productions and is an active member of Beta Club, Science National Honor Society and Fellowship of Christian Athletes.