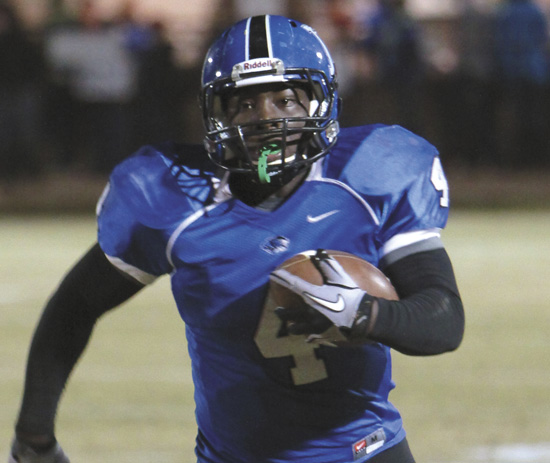 DaMarcus James accounted for four total touchdowns and 227 yards rushing to lead Demopolis (8-3) to a 31-14 victory over Fairfield in the first round of the Class 5A playoffs Friday night.

“It is kind of hard being out. They seemed kind of down without me,” James, who missed much of the last two regular season games due to injury, said of watching his teammates from the sideline. “I had to come back and motivate them so we could get back to playing Demopolis football. We know it is playoff time. We know it is time to step up.”

The Tigers did just that Friday night with a strong defensive effort. Demopolis halted Fairfield’s Theo Edmonds inches shy of the goal line on fourth down to negate a first quarter threat.

With 6:05 to go in the second quarter, Demopolis drew first blood with a nine-yard touchdown run from James that capped an eight-play, 50-yard drive. Cameron Fendley added the extra point to put Demopolis up 7-0.

After a three-and-out from the DHS defense that featured three Deonte Washington tackles, the Region 3 champs went back to work. It took the Tigers six plays to cover 66 yards, most of which came when quarterback Ben Pettus called his own number on an option play and bolted 49 yards. Four plays later, the Tigers opened up the playbook when Pettus pitched the ball to James Wilson who tossed it back to James, who had lined up to the left of the formation at receiver, on an end around. James promptly pulled up and threw the ball 12 yards to a wide open Pettus for the touchdown.

“That was real fun. That was probably one of my favorite moments of all time,” Pettus said of the play. “The whole time I was thinking, ‘I better not drop it or I can’t say anything to my receivers the rest of the year.'” Pettus’ catch and Fendley’s extra point put the Tigers up 14-0.

Demopolis got back on the scoreboard again with 8:12 to play in the third quarter when Fendley hit a 34-yard field goal to culminate Demopolis’ opening possession of the second half and give DHS a 17-0 lead.

DHS’ defense bent but did not break on the ensuing possession when Tramaine Irby stepped in front of a Fairfield pass at his own 11 to squelch another scoring threat.

Early in the fourth quarter James needed only one play to cash in on a Washington interception when he dashed 57 yards for a 24-0 DHS lead.

Fairfield answered back in short order when Anthony Stevenson hit Darren Clark for an 81-yard touchdown pass to cut the deficit to 24-6.

Four plays later James struck again, going 52 yards on his final carry of the evening to stretch the Demopolis lead to 31-0 with 4:44 to go in the game.

Fairfield added the final points of the evening when Stevenson hit Edmonds on a screen pass that went 36 yards for a score before Clark dove in for the two-point conversion run.

James finished the game with 227 yards rushing and three touchdowns on 20 carries in addition to his passing touchdown. Pettus ended the night with 124 yards on 13 carries. Washington led the defense with 10 tackles, four sacks, an interception and a forced fumble. Matt Barger recorded 10 stops.

Demopolis hosts Hueytown next week in the second round of the state playoffs.