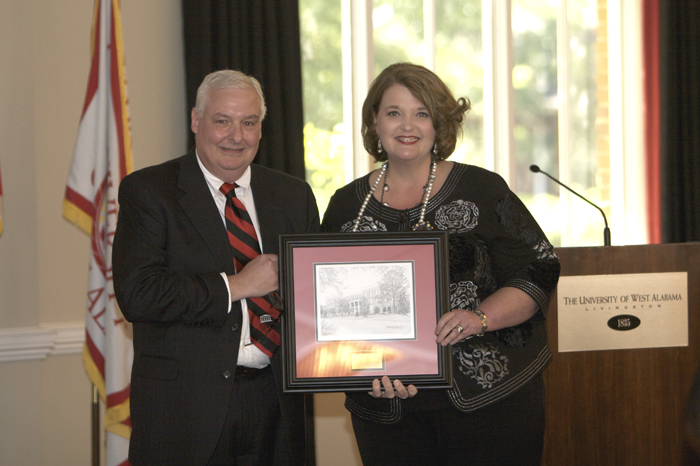 LIVINGSTON – The University of West Alabama and the UWA National Alumni Association presented the annual Alumni Achievement Awards during Homecoming to recognize outstanding graduates from each college.

Mitzi F. Gates of Linden received the College of Liberal Arts award. Gates graduated from Livingston University in 1985 and has spent the years since teaching English to high school and college students in high schools and colleges from Nashville, Tenn., to Livingston, and back to her hometown of Linden.

A classroom leader and mentor to thousands of students, Gates served for seven years as academic coordinator for UWA’s Upward Bound Program, which offers a jump start for high school students who show a desire in learning and higher education.

“It was the most humbling honor ever,” Gates said of the distinction. “Not only am I an alum of UWA, but I also taught there for 10 years. It was just a big honor to know that my peers selected me for that. It was just humbling is all that I can say.”

Gates is a member of Phi Kappa Phi, Alpha Delta Kappa, Linden’s Quest and Rotary Clubs, and has held the City of Linden’s Mayor’s Office since 2008.

She is a member of Thomaston Baptist Church, where her husband Greg has served as deacon for 10 years and she as choir director for 14 years.

The University also recognized two organizations that make valuable contributions to the West Alabama community. “The University We Will Be” campaign was named the Outstanding UWA Organization. The campaign is an ongoing initiative to raise $15 million in gifts and pledges by 2012 for the University. These funds will improve campus facilities, provide additional scholarships, enhance the campus learning environment, support the faculty and fund community outreach projects. Since its launch in 2007, the campaign has raised $10 million in public and private gifts.

One of those two organizations is Suttles Truck Leasing of Demopolis received the West Alabama Community Service Award. Through the generous support of James Suttles, founder and president of Suttles Truck Leasing, Inc., the College of Business established the James Suttles Entrepreneurship Institute in 2008. The program is geared toward providing Black Belt residents with the knowledge and skills to launch new endeavors, while retaining and expanding existing small business in the region.

Since its opening in the early 1970s, Suttles Truck Leasing has served as a major employer in Demopolis and the surrounding West Alabama region. The company employs more than 250 Black Belt residents.

Betsy Compton contributed to this report.