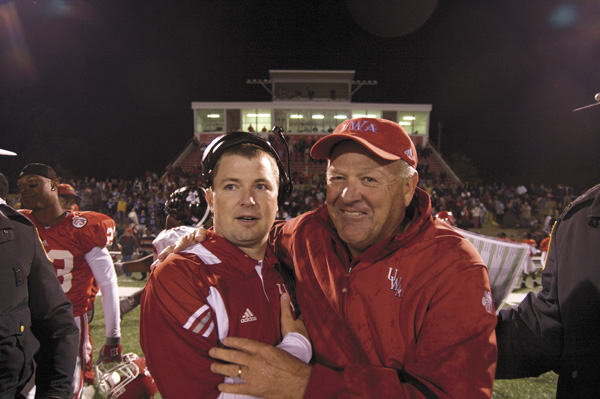 LIVINGSTON – Bobby Wallace headed for Gulf Shores Friday. The playoff hopes of his UWA Tigers and the punctuation to his storied career rest in the hands of a number of other teams this weekend. So, exactly how the Division II Hall of Famer’s career ends has yet to be determined. But after Wednesday’s news of his impending retirement, Wallace knows for sure that the end of that chapter is near.

If the Tigers do not make the playoffs, Wallace goes out a winner after UWA knocked off No. 7 Valdosta State Thursday night.

“That was a fun night,” Wallace said. “I think that was a good win for our seniors, to get to seven wins for the second season in a row. We beat Valdosta for the first time since 1985 and only the second time in school history. And with them leading the conference at the time.”

The victory serves as a microcosm of what Wallace managed to bring to UWA in his five-year tenure with the program; legitimacy. Wallace took over the UWA program at a time when it was mired in ineptitude. In a short span, he has led the Tigers to consecutive winning seasons and given fans something about which to cheer after taking the team to the playoffs for the first time in 34 years with a 2009 berth.

“I’m real proud of what we’ve done in the last five years,” Wallace said. “It has taken a lot of help. My experiences at North Alabama allowed me to be able to do that. We’ve been able to get the program to where people come to games expecting us to be able to compete. When they get going over the next several days and make the announcement about who the next head coach will be, I expect that it could keep heading in that direction.”

For Wallace, the West Alabama successes are just the latest in a long line of accolades that are unparalleled at the Division II level.

He earned GSC Coach of the Year honors three straight seasons from 1993-1995 while also garnering NCAA Division II National Coach of the year during that same stretch. In 1997 he received the distinction of Division II Coach of the Quarter Century. There was the Alabama Sports Hall of Fame induction in 2004 and the selection to the Division II Football Hall of Fame earlier this year. But Wallace said none of that stands out to him when he reflects upon his career.

It is those relationships that Wallace will spend time revisiting during his retirement as he intends to take time to watch and support a number of his former players who are now coaching.

“I’ve got quite a few former players that I’ve coached that are now coaching,” Wallace said. “It’s just time to sit back and watch them. It’s kind of like being a proud dad.”

And when next autumn rolls around, Wallace will likely be found somewhere in Gulf Shores, spending time with family and friends as he prepares for the first football season in decades in which he gets to be a fan again.

“I’m going to miss the Gerald Worshams of the world,” Wallace said, using his current standout junior receiver to explain the experience of coaching his favorite players over the years.

“He is one of the best kids I have ever coached. I wanted to be around for his senior year next year, but I’ve got to cut it off at some point.”