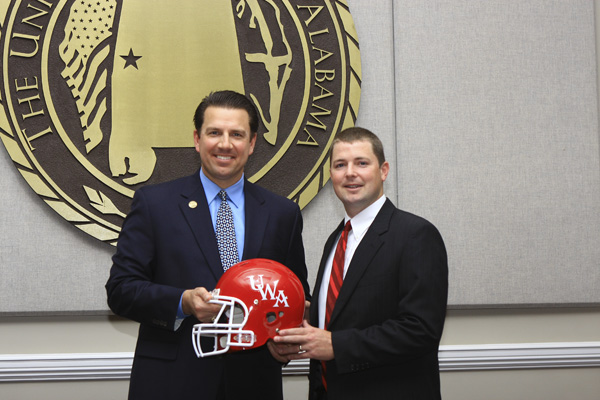 LIVINGSTON – The University of West Alabama Department of Athletics introduced Will Hall as the program’s new head football coach on Wednesday. Hall takes over the reins from Division II legend Bobby Wallace after serving as the school’s offensive coordinator for the past three seasons.

Hall, 30, has established himself as a great talent in the three seasons in which he has guided the Tiger offense. In the 2009 run to the NCAA Playoffs, his unit was ranked third in the Gulf South Conference and 21st in the nation, and UWA finished this past season with the 17th-best offense in the land with an aerial attack that finished 10th as Hall’s group averaged over 300 passing yards per game.

“I knew when I was 4 years old what I wanted to do with my life,” said Hall at Wednesday’s press conference. “It’s been a goal of mine to stand before you today, and I feel like I’m ready for this.

“As a program we’re close. We lost four games by nine points, and we’ve got to make up those four points. And to do that, we’re going to run the best program we can possibly run all the time.”

Before joining the UWA staff, Hall spent a season at the University of Arkansas at Monticello where he mentored the 2007 GSC Freshman of the Year Scott Buisson and guided the UAM rushing offense to the top of the GSC charts.

“I can promise you that Will Hall has passion,” UWA Director of Athletics Dr. E.J. Brophy said at the press conference. “He has passion for football, passion for his family, passion for this wonderful university, and it’s contagious. And it is appreciated.”

Prior to his stint at Monticello, Hall served as offensive coordinator at Southwest Baptist University in 2006, and led SBU to 23rd nationally in total offense and 15th in rushing yards per game in Division II. Hall also spent time on the coaching staffs at Presbyterian College (S.C.) and Henderson State.

A Harlon Hill Trophy winner, the Amory, Miss. native had a tremendous collegiate playing career at the University of North Alabama. He won the award given to Division II football’s best player in 2003 as he quarterbacked the NCAA quarterfinalists to a 13-1 record, and his efforts garnered him All-American accolades from the Associated Press and numerous other organizations as he set 16 UNA records during his two years in Florence. He continues to hold the program marks for completion percentage in a career (68.0) and a season (71.8), and his impressive string of 168 pass attempts without an interception remains tops at UNA as well.

He is married to the former Rebecca Randle, of Amory, Miss., and they reside in Livingston with son Will “Tripp” Hall with another son expected in March.

Hall will take over the head coaching duties effective Jan. 1, 2011, and terms of the contract were not announced.