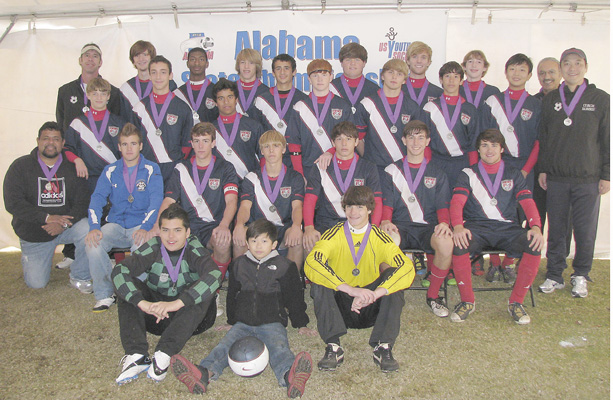 The River City Soccer League’s U18 team put together a landmark run in Decatur last weekend, taking the silver medal in the Governor’s Cup tournament.

“This was the first time we’ve been able to bring a medal back home,” assistant coach J.R. Rivas said of the accomplishment. “It was the silver, but we will definitely work for the gold next year.”

The Demopolis league has competed in the Governor’s Cup since 1996, experiencing its share of difficult losses and growing pains over the years.

“Last year the team won several games. But by the point system, we were not able to qualify for second place,” Rivas said. “This year, we were actually beating the No. 1 team in the first half.”

The team opened play Saturday with a 5-4 loss to Huntsville-based Crossfire. Jacob Roemen and Tyler Howerton each scored two goals in that game. The second game of the day saw Demopolis River City tie 3-3 with Fultondale. Roemen, Cameron Fendley and Jarvis Lawson each scored a goal in that contest. The squad continued play Sunday, beating United North Alabama 3-1 in a game that saw Howerton score a goal and Roemen score two.

“It started with what they did 14 years ago,” Rivas said of the latest feather in the River City Soccer League’s cap. “The fact that a lot of people that really care about the children in the community and have brought in a lot of outside help, the assistance of the parents being involved in the sport and the fact that we are able to go to bigger cities and see what they are doing with their recreational leagues. I remember 12 years ago going to Governor’s Cup and getting beat 14-0 and that is no longer happening.”

“I would like to thank Coach Larry Brooks and Daryoosh Momenpour and Coach and Dr. Ronnie Chu,” Rivas said. “He was a really great asset out there. We probably would have lost three good players out there if it were not for him out there icing down kids and getting them back ready.”