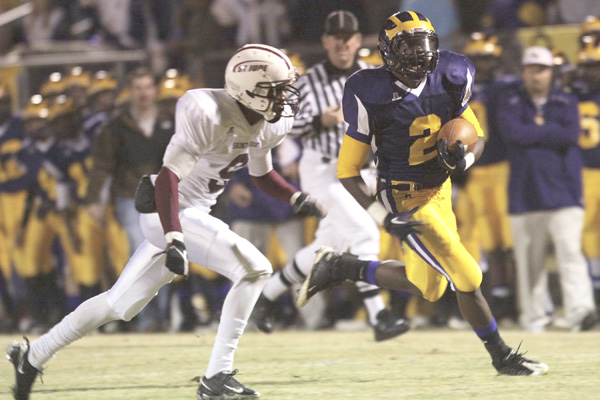 SWEET WATER – With a potential rematch with south Marengo rival Linden hanging in the balance, Sweet Water (10-3) cruised to an easy 47-15 third round win over St. Jude Friday night.

Deon Waters took the Bulldogs’ third play of the game 47 yards to the end zone, putting the home-standing ‘Dawgs up 7-0 early.

Following a Pirate punt, a Bulldog fake punt on fourth-and-three fell incomplete and set St. Jude up on the Bulldog 44. Four plays later, the Pirates successfully executed a fake punt of their own to keep the drive alive at the Dawgs’ 34.

After successfully converting another fourth and short, Bryan Brower cracked the goal line from 2 yards out with nine seconds left in the first to knot the game at 7-all. Brower’s score marked the first rushing touchdown scored on the Bulldog defense this season by a 1A opponent.

However, the Pirates’ jubilation wouldn’t last the remaining nine seconds.

Kendarius Ward took the ensuing kickoff 70 yards as time expired in the first to seize the 14-7 lead – his second kickoff return for a score this season.

Following a Pirate punt, the Bulldogs marched 55 yards down to the St. Jude five yard line before Chris Landrum bulldozed his way through the Pirate defensive line on fourth and four to put the Bulldogs up 21-7.

Following another St. Jude punt, Sweet Water set up on the fringes of their side of the 50. Facing another fourth and short on the Pirate 20, Brett Davis snuck forward for three yards to keep the drive alive.

Deon Waters took the next handoff to the five before giving way to Landrum who pushed to the two. Michael Thompson capped the drive on the next play on a two yard rushing score, his seventeenth of the season, and gave the Bulldogs the 28-7 lead with one minute left in the half.

Landrum would make his presence felt again just before the end of the half as Landrum picked off a Tony Minnifield pass with 21 seconds left near mid-field.

Sweet Water quickly worked its way down to the 9 yard line where Taylor Wilson nailed a 28 yard field goal as time expired, giving the ‘Dawgs a 31-7 lead at the half.

The Sweet Water defense dominated the first half, holding the Pirates to 52 yards offense in the first 24 minutes.

Sweet Water fumbled away its opening possession, giving the Pirates the ball on the Bulldogs’ 45 yard line 14 seconds into the second half.

On fourth and short, Kenrick Sewell picked off another Minnifield pass, putting the Bulldogs right back where they started the half.

Thompson took the next handoff 56 yards for his second rushing score of the night as the Bulldogs cruised out to a 38-7 lead.

On St. Jude’s next possession, Auburn linebacking commit Landrum blasted into the backfield and forced a Pirate fumble, which was pounced on by Thurston Williams.

Sweet Water handed the ball right back when Bryan Browed pounced on a Bulldog fumble a few plays later. The Pirates capitalized on the gift, eventually scoring on a 17 yard run by Byron Brower. Carlton Perkins’ two point conversion was good and the Pirates cut the Bulldog lead to 23 with four minutes left in the third.

Sweet Water would answer on their next drive as Thompson got his second touchdown of the night to put the ‘Dawgs back up 45-15.

With the Pirates eating up chunks of real estate, Jeremy Athison picked up a St. Jude fumble, killing a promising Pirate drive at the Bulldogs’ 24 on the opening play of the fourth quarter.

After working its way down to the St. Jude 5 yard line, and eating five minutes off the clock, the Bulldogs coughed up the ball and gave the Pirates 95 yards to go and not long to get there.

The backup Bulldog defense capitalized on the opportunity for a defensive stand, forcing a safety with just more than a minute left to play and giving the Bulldogs 47-15 lead.

Thompson lead the Bulldog rushing attack with 126 yards on 16 carries. Sewell followed with 93 yards on 11 carries and Waters kicked in 85 yards on eight carries.

The Bulldog defense gave up only 139 yard total offense on the night.