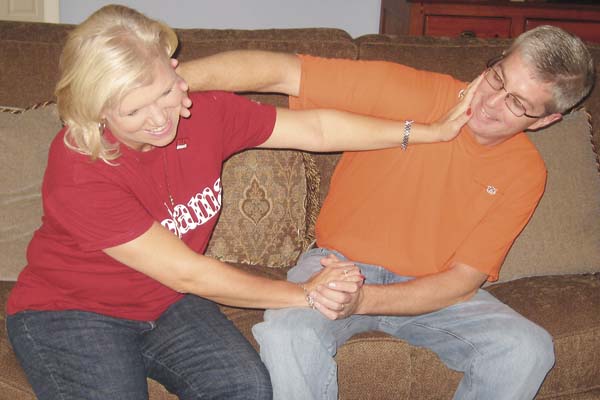 Tracy and Chris Stewart are your typical, All-American family. They’re good neighbors. They’re hard workers and, thanks to the effort put into a 20-year marriage, they are the picture perfect couple…most of the time.

There is one day each year that you can bank on Tracy and Chris to draw a line in the sand, daring the other to cross for approximately three hours.

While many married couples squabble over finances, major purchases or whose family they will visit over the holidays, few things will erupt a turf war in the Stewart house like the Iron Bowl.

“It’s bad,” Tracy, who grew up in an Alabama household and graduated from UA laughed of the game day atmosphere in her home.

The Stewarts’ fandom runs so deep for their respective teams that they rarely watch the game from the same place. This year, however, they will have no choice.

The Stewarts hold tickets to Friday’s game in Tuscaloosa. And even though he’s stepping deep into enemy territory, Chris is armed with one piece of statistical information that gives him cause for excitement about the outcome of Friday’s clash.

“She’s never been to an Iron Bowl where Alabama won,” Chris, who grew up in an Auburn house and graduated from The Plains said with a smile.

Also in the mix of this divided household are the Stewart’s two children Stephen and William: two staunch Auburn fans.

“My brother and I took William to an LSU game when he was three,” Chris said of how his children’s lineage began to form. “He was a fan right there.”

“I lost him at three,” Tracy said of her chances to convert her oldest son to the Crimson Tide.

The children’s dedication to the Tigers was cemented during Auburn’s 13-0 season in 2004 and a follow up campaign in 2005. The Tigers’ undefeated season is still a sore spot for Tracy, as is her family’s regular attendance of those home games.

“I wanted (Alabama) season tickets for years,” Tracy recalled, “but we never could afford it. Or that was always the excuse I got. One day, Chris came home and he was just so excited. You could see it all over his face. He said, ‘I bought something.’ I thought, ‘Wow. This must be something big for him to be that excited.’ It was Auburn season tickets.”

The Stewarts’ relationship has managed to survive more than 20 Iron Bowls and a stark contrast in fond Fall Classic memories.

“Last year,” Tracy said of her favorite Iron Bowl. “We were watching it on a cruise ship and after three rough quarters, I could just see everything falling into place. We were going to come back, win the Iron Bowl, win the SEC and a National Championship.”

While the number of memories that may be produced from this year’s Iron Bowl has not yet been determined, the Stewarts’ predictions shouldn’t be too surprising.