‘Successful’ COTR ‘10 in the books 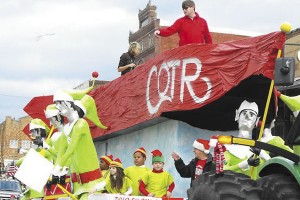 As Executive Director of the Demopolis Area Chamber of Commerce, Jenn Tate’s first official Christmas on the River is over, and by most accounts it was a success.

“We’re already in the process of critiquing for next year,” she said of planning what will be the fortieth installment of the annual event.

Tate noted that much of the feedback from the weekend’s festivities had been positive.

“We had a lot of positive response to shortening the events to four days,” she said. “Everybody seemed to enjoy everything.”

While the event managed to dodge rainfall for the first time in recent memory, rain a few days prior did take a toll on one of the festival’s most recognizable events.

“If there’s one thing I regret, it’s the way the night parade and the fireworks worked out,” she noted.

Significant amounts of rainfall earlier in the week helped block access to a small road where organizers place the fireworks. Much of the time typically devoted to setting up the display and explosive charges had to be dedicated to clearing the road, which pushed the fireworks display later than anticipated.

“It takes about three hours to set all that up,” Tate said, “and they spent at least that long clearing that road. But, we told everyone the event was from 6:30 to 8:30, and it was over by 8:30, but the fireworks did get a later start than we expected.”

One of the improvements Tate hopes to see next year is in the amount of volunteer help organizers receive. She said that will be a key part of the event’s future growth.

“There are so many things that we could do, but we just don’t have the people to do it,” she said. “Everyone’s got great ideas, so let’s do something with those ideas.”

Tate said attendance was also strong, another indication the 2010 event was a good one.

“I think attendance at the day parade was higher than normal and the gate at the barbeque competition was about 1500 to 1800, which is good,” she said. “I think overall, attendance was very good.”