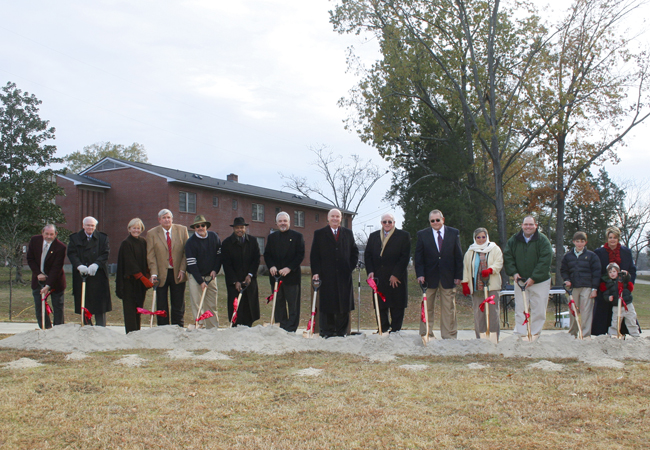 LIVINGSTON – University of West Alabama officials and guests this week broke ground on a 459-bed freshmen residence hall named in honor of a longtime English professor and administrator.

Robert B. Gilbert Hall, which will open in August 2012, replaces aging Speith and Selden halls and will allow those buildings to house student services, classrooms and office facilities. The $31-million, 116,000-square-foot residence hall will also include a pair of food-court style restaurants serving the entire campus.

“Gilbert Hall will address our need for more and better student housing on campus, a major factor in our continuing efforts to attract quality students to the University of West Alabama,” said Vice President for Student Affairs Danny Buckalew at Wednesday’s ceremony.

The co-ed residence hall, which will feature double-occupancy rooms with private bathrooms, will be built between Patterson Apartments, Wallace Hall and Speith Hall, with parking located adjacent to the four-story building and across Wise Loop.

The ceremony included University administrators, trustees, the Gilbert family, and representatives of both Hoar Program Management and Herrington Architects, the Birmingham-based firms leading the project.

President Richard D. Holland says the University is pleased to name the new residence hall in honor of Gilbert’s distinguished career as a professor and administrator at the 175-year-old institution.

“Dr. Gilbert has been recognized by students and colleagues alike for the lasting impact he has had on those who knew him,” he said.

Gilbert joined the faculty in 1948 as an English professor and Department of Languages and Literature chairperson. He served as the first dean of the University’s graduate school from 1963 until his retirement in 1971. Gilbert helped found the Society of the Golden Key as the highest honor given to alumni and former faculty. A Distinguished Professor, he was awarded the honorary Doctor of Humane Letters in 1976.

In addition to Gilbert Hall, three new buildings at the Hoover Apartments complex are under construction, and the two existing buildings will undergo minor renovations. Ninety-six additional beds will supplement the current 64 beds, with the residence hall scheduled to open in August 2011.