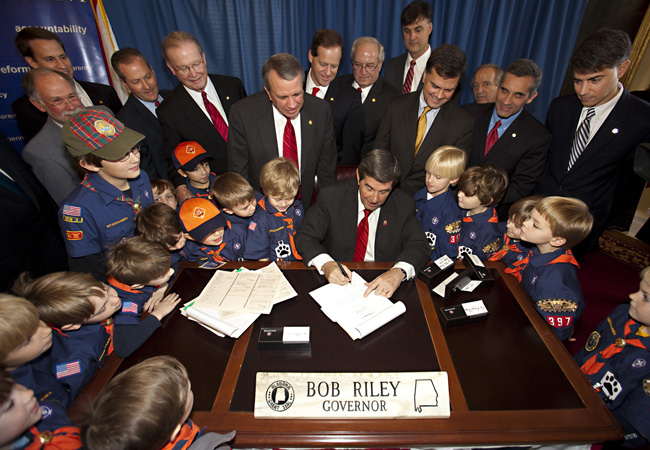 MONTGOMERY – With seven strokes of the pen, Monday Alabama went from having some of the weakest ethics and public corruption laws in the country to some of the strongest.

Joined by lawmakers, concerned citizens and even a Cub Scout troop, Governor Bob Riley signed into law seven sweeping anti-corruption reforms recently passed in a special session of the Alabama Legislature. Governor Riley called the special session on December 8 to address the state’s need for strict laws against corruptive practices by public officials.

“This is a new era of accountability for our state,” Governor Riley said. “It is a sea change in attitude about reform, transparency and openness in government. This special session was all about giving the people of Alabama the type of government they deserve but were always denied because of politics. Now, because of these landmark reforms, state and local governments in Alabama will operate more honestly, more openly and with more accountability than ever before.

“Government will be more responsive to the needs of our citizens and less beholden to the wants of special interests.”

While lawmarkers showed strong support for Riley’s intent, others questioned his methods.

“This Special Session cost $300,000,” local Rep. A.J. McCampbell said, “and these are dollars that def could have been saved, especially when you look at state of General Fund and Education Fund. It was not fiscally responsibile.”

McCampbell added that the governor’s legislation had the support of lawmakers but likely would have found similar support when the regular session begins early next year.

The new laws include measures to ban PAC-to-PAC transfers, put the first-ever limits on what lobbyists and those who hire lobbyists can spend on public officials, grant the Alabama Ethics Commission subpoena power, ban pass-through pork spending and double dipping by legislators, end taxpayer funding of political activity for special interest groups, and require lobbyists who lobby the executive branch to register and file disclosures.

While the bill-signing ceremony at the Alabama State Capitol marked a triumphant end to the special session, Governor Riley called on lawmakers to carry on the banner of reform and go further to make government even more transparent and accountable.

“This is not the end,” Riley said. “This is only the beginning. The day for reform and accountability is not over. This is only the dawning of a new day in Alabama. Much work remains. With new leaders and a new group of reform-minded legislators now in office, I’m confident even more can be accomplished in the months and years ahead.”

Jim Sumner, Executive Director of the Alabama Ethics Commission, applauded the final passage and signature of the new reforms saying it signaled a monumental shift in the political culture Alabama.

“Today is a truly historic day for all who believe that government exists solely to benefit the public instead of those who serve in government and those who attempt to influence its decisions,” Sumner said. “As I said on the first night of the special session, we would have but one opportunity to do this right – and do it right we did.”

Speaker of the House Mike Hubbard also noted the historic nature of the new laws and said the people can come to expect more reform-minded policies to emerge from the new Legislature.

“We promised the people of this state they would see a difference in the way their government operates,” Hubbard said. “In seven days we passed seven anti-corruption bills and delivered on that promise. This new Legislature is committed to being more transparent, more accountable and more responsive to the people’s needs than ever before.”

“The passage of these reforms is a critical first step toward restoring the people’s trust in their government,” Marsh said. “We need that trust going forward as we try to tackle the problems that will face our state. We answered the people’s mandate for change and sent a message that things are going to be different in Montgomery from now on.”