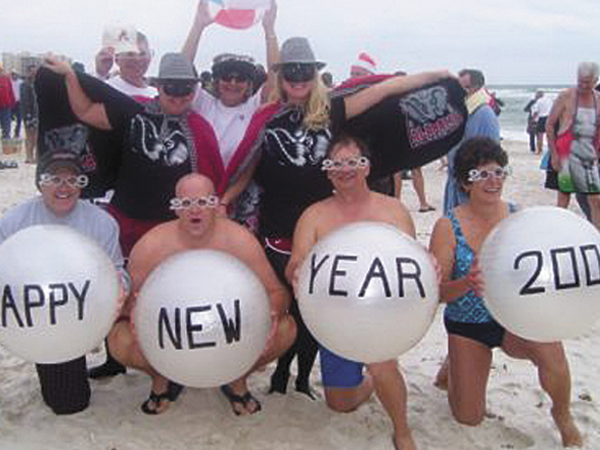 What started as a simple getaway with a few friends has grown into an annual tradition involving upward of 20 local people.

Demopolis’ Roger Hoggle and 15 to 20 of his closest friends celebrate each New Year by jumping into the ocean when they take part in the Polar Bear Plunge at Flora-Bama.

“A friend of mine that lives down there told me (Tuesday) he checked the water temperature down there and it was 49 degrees,” Hoggle said of what awaits the Demopolis contingent Saturday.

The event has swelled in recent years, drawing approximately 1,000 people every Jan. 1. But, somehow amid all the chaos, the Demopolis team manages to get itself featured in a local newspaper or on the local television news each year. Hoggle said that is because of Becky Rhodes.

“Becky Rhodes always comes up with the plan,” he said of the group’s annual themes and signs. “She’s the mastermind behind what we’re doing each year. She actually makes us have practice on Friday afternoons behind the place. She’s the coach.”

The group usually arrives in Orange Beach on Dec. 30, spending the day between the hot tub and the bowl games on television.Then there is New Year’s Eve outing to Live Bait or some other local hot spot. But it is all just the undercard building up to New Year’s Day at noon when the owner of the Flora-Bama counts down and the Demopolis group rushes toward the ocean, proudly boasting the sign that separates it from the Elvis impersonators, the 70-year-old men in speedos and the average dipper.

“Every year we come up with some kind of theme,” Hoggle said of a practice that last year saw some of the men of the group in grass skirts and cocunut bras to celebrate the chosen Hawaiian theme.

And after the dip is done and the first lunchtime of the New Year rolls around, the group reassembles in a room and has a traditional meal featuring blackeyed peas, cornbread and all the fixings.

“It’s like a little mini vacation,” Hoggle said of the annual rite.