On the 12th day of Christmas 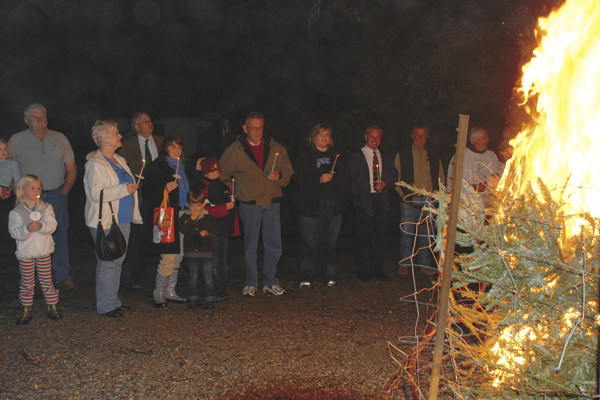 Trinity Episcopal Church in Demopolis celebrated the 12th day of Christmas Wednesday night with a special service to commemorate the closing of the holiday season.

“It’s really a good crowd for us on Wednesday night,” J.D. Barnes, Rector for the church, said.

The festivities were designed to close out the season in a celebratory fashion while observing the Twelfth Night.

“This was an idea for having an observance of some type,” Barnes said of the special service and Christmas tree burning that followed. “Society has kind of gotten into preparing for Christmas right after Thanksgiving and then it is gone pretty quickly. It should really live on a little longer. It is God incarnate coming into the world. It’s the most important thing for all of us, so we should celebrate that.”

The observance of the 12 days in the Christmas season begins Dec. 25, a date in which the group recognizes the birth of Christ. The night of Jan. 5 marks the 12th evening of the season, giving way to the Feast of the Epiphany, traditionally observed Jan. 6.

“The Day of the Epiphany is supposed to be the feast day for the Magi’s arrival,” Barnes said of the significance of Jan. 6. “In the Episcopal church, the service for observing (Christ’s baptism) is the first Sunday after the Epiphany. This coming Sunday is when we as the Episcopal Church observe the baptism of Jesus. It’s also kind of a special day when, if people want to be baptized, they can be baptized.”

The celebration of the Twelfth Night and the Feast of Epiphany took its root in Eastern Orthodox churches and is older than the actual Christmas Day celebration.

“Christmas Day got to be more popular because of Christianity in the Roman Empire as opposed to the East and the more orthodox side of things,” Barnes said.

For Trinity Episcopal, Wednesday’s celebration was unique in that it was a return to an older tradition.

“A few different people said (the tree burning) was something they had done before,” Barnes said. “I’ve never been at a church where they had done it.”

“It was a lot more like what we would have done on a Sunday because of the idea of the Day of the Epiphany is more of a feast,” Barnes said. “For a major service like this, we always have communion.”

After the service, church members grabbed candles and headed outside for the bonfire of Christmas trees. In total, approximately 20 trees donated by parishioners and other community members were set ablaze.

The evening wrapped up with members returning to the parish hall for a meal.

“Everybody went inside the parish hall and had various types of chili and a Kings Cake,” Barnes said. “I think we’ll do it again. People who were here seemed to have a good time. I think we’ll try again next year.”