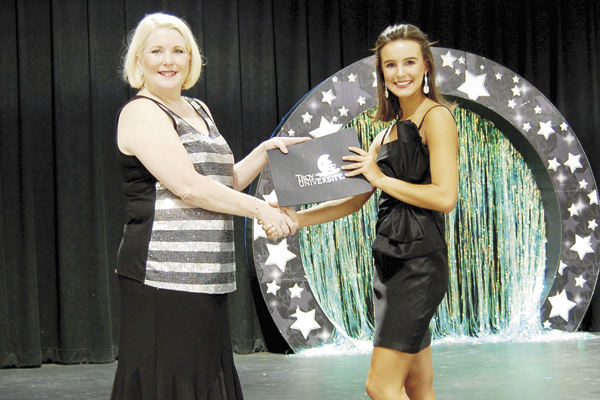 Demopolis High School senior Samantha Walker headed to Montgomery Friday as Sumter County’s Junior Miss 2010. Walker, a resident of Sumter County, entered the scholarship competition in August through the at-large program, which is aimed to find exceptional young women from counties without a Junior Miss program.

Walker’s success at the Aug. 7 competition has her as a temporary resident of Montgomery’s Bobby and Tammy Stephens’ home over the next week as she prepares to compete with 53 other outstanding young ladies from around Alabama Jan. 14 and 15 at Frazer United Methodist Church in Montgomery.

“It’s not one of the competitions,” Walker said of what has made her anxious about the event. “But when you go, you’re not able to have your phone with you. Not being able to talk to my mom and dad, I’m definitely the most nervous about that.”

While she will miss her parents, Bob and Alice Walker, and little sister McKenzie, Samantha will be realizing a goal she set for herself early in her high school career when she competes at Junior Miss.

“My sophomore year is when I really found out about it,” she said of the competition. That year Samantha served as the little sister for Ashton Tucker as she took part in the competition.

The appeal of the competition is obvious for Walker, who has excelled academically thus far and intends to major in engineering at the University of Alabama.

“I like the fact that it’s a big scholarship program,” Walker said. “And (Sumter County Junior Miss) is a nice title to have. It’s an honor to be able to have that kind of title.”

Walker’s resume already includes being a three-year member of the Demopolis High softball team, a four-year member of the DHS cheerleading squad, treasurer of the Student Council, historian of DECA and memberships in the Science National Honor Society and the Beta Club.

But the competition has more appeal than just resume padding and scholarship collecting for Walker.

She, like many girls, has taken the opportunity to expand her network and make new friends.

Amid all the hustle and bustle that goes with preparing to spend a week away from home and prepare for a competition of this magnitude, Walker has found time to allow anxiety to creep into her thoughts.

“I was nervous at the beginning of the week,” she said.

“But I’ve gotten to where I”m just ready to go and meet all of these people and have a good time. I don’t want to be nervous anymore. I want to have fun and enjoy myself.”

When it comes to the actual competition, Walker believes she will find herself right at home in the scholastics and fitness categories as both cater to activities she has always enjoyed.

It is the talent portion where she will offer a different flavor than her counterparts, many of whom will show off their musical prowess.