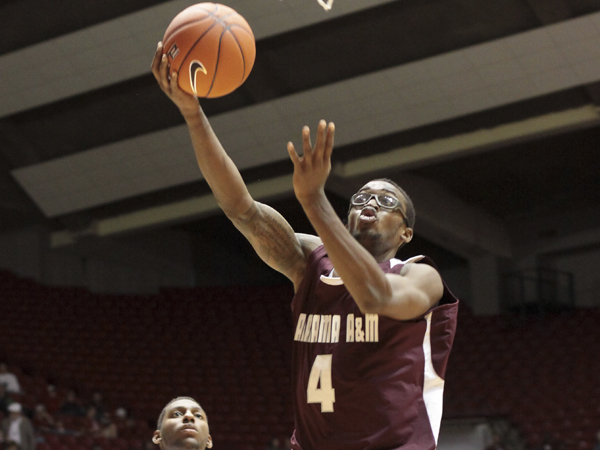 Cantey has helped the A&M men’s basketball team to a 6-8 start and a 3-2 record in SWAC play through Friday.

“I feel like I have grown a lot from the first time I came to AAMU, as a basketball player and as a person,” Cantey said of his rapid development. “With basketball, I used to be fresh and wild, but now as the time has passed, I have learned the system and I have learned that I don’t have to rush anything. I have also learned the little tricks of the trade dealing with this team.”

Cantey’s development has seen him post 10 points a game to lead the Bulldogs in that category. Cantey has been the Bulldogs’ leading scorer four times through the first 14 games. His 4.3 rebounds per contest also put him third on the team in boards.

“This year defenses are doing their homework on us as a team and on me, but that is expected,” Cantey said of the increased attention his success has won him. “Since I have been on the team this long, defenses focus on me more and pay attention. I just have to learn how to get my team involved and help contribute to the team.”

In addition to his efforts in trying to get his teammates more involved in the action, the 6-5, 190-pound Cantey has spent time developing aspects of his offensive game.

“I worked on my jump shot and ball handling a lot this past summer, so I am more confident in taking that midrange shot. And being able to step back and make that three-pointer is a plus for me,” Cantey said.

While his offensive game has garnered most of the attention, Cantey has made an impact on the defensive end as well. The forward has accounted for a steal and nearly a block per contest this season.

“I can always get better,” he said. “There is always room for improvement in all areas of the game. I just have to keep working on my game and everything will be good.”

For Cantey, now the focus is on his team and realizing a set of team and personal that have yet eluded him in his A&M tenure.

“My goals for the team are to win the SWAC championship. We really look good this year and I feel like we have too many weapons for us not to win the whole thing, as long as we keep clicking and playing together as a team,” Cantey said. “Personally, I’m trying to make it on the All-Conference team this year to give me something to look forward to and progress into next year.”

As he looks over his basketball future, Cantey realizes there is just over a year left in his life at A&M. And while that realization would be alarming for most, Cantey said he is just enjoying the moment.

“Life after A&M is up for grabs right about now. I mean, I don’t know what the future holds,” he said. “I can only determine what happens now and during this basketball season. So I’m just focused on the team and winning a SWAC championship.”