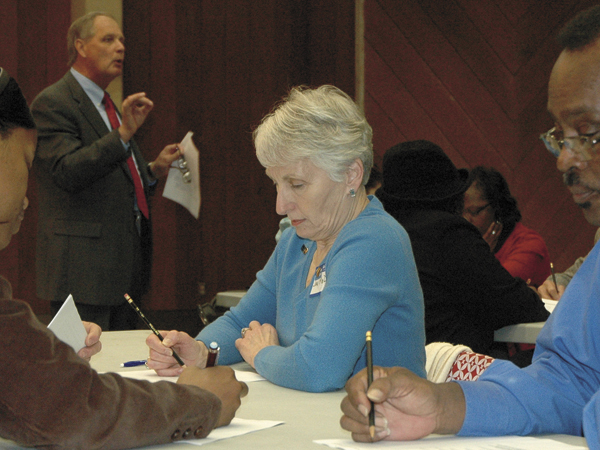 More than 65 community members were on hand at the Civic Center Thursday night to take part in a session designed to help Demopolis City Schools devise a five-year strategic plan.

“This is a wonderful turnout for a system the size of Demopolis,” Dr. John Osburn, facilitator of the meeting, told those in attendance.

Osburn has been helping to guide the effort to formulate the school system’s plan. Thursday’s session, which allowed for community input, saw Osburn bring in assistance in the form of retired Geneva superintendent Jim Bixby and retired Enterprise superintendent Jim Reese.

Osburn began the session by outlining the purpose of a five-year plan, the process for putting such a guideline in place and the agenda for Thursday’s meeting.

“We are in the most trying times I’ve known in public education since 1968,” Osburn said of the challenges Demopolis and its sister systems are attempting to overcome in the current financial climate.

In view of the financial constraints and the accompanying lack of resources, the five-year plan – as Osburn pointed out – will serve to help the DCS Board of Education make its decisions in the immediate and long-term future.

“If there is a plan that has been put in place, it helps this board allocate its resources,” Osburn said.

The beginning stages of formulating a plan involved a steering committee of DCS teachers and administrators and community leaders. That committee, Osburn said, efficiently carried out the first phase of the project.

Osburn shared with the community a list of eight objectives the executive committee put together during its fall meeting. The committee determined its aim is for Demopolis City Schools graduates to be proficient in core academic subjects, ethical and honest, critical and analytical thinkers, efficient commicators, physically fit and healthy, literate in information technology and media, respectful of diversity and financially and economically literate.

“They came in there with consensus of purpose,” Osburn said of the committee members, who will meet again Jan. 27 to review the suggestions and recommendations made during Thursday’s community session.

According to Osburn, Thursday’s community involvement meeting provided an important piece of the planning process.

“We want to involve everybody we can who has a concern in Demopolis City Schools,” Osburn said.

Once Osburn completed the outline of the evening’s activities, the group split into three areas of the building, dividing into smaller pods to discuss issues facing DCS and other public school systems.

“It’s positive and there has been a lot of input,” Demopolis City Schools Superintendent Dr. Al Griffin said of the results of the meeting. The five-year strategic plan is expected to be completed in March prior to the school system’s accreditation review by AdvancedED.

“You develop a strategic plan that fits your area,” Griffin said. “The strategic plan will model and identify with the AdvancedEd accreditation we’re going to be going through in April.”