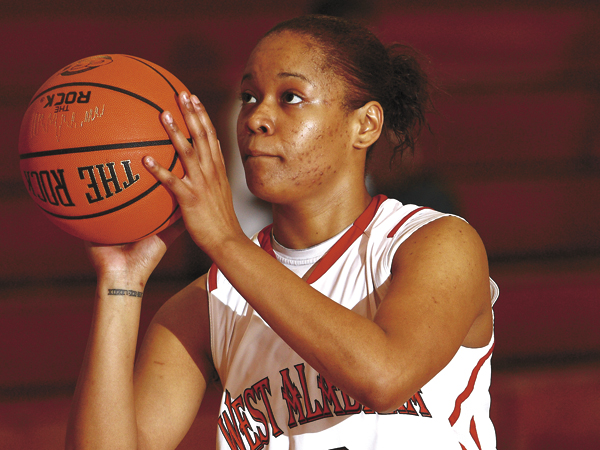 LIVINGSTON — The University of West Alabama women’s basketball team (14-2) is in new territory after a Thursday win gave the squad the best start in program history. At the heart of the Lady Tigers’ success has been newcomer Mystee Dale.

“I didn’t make the decision coming out of high school to go where I wanted,” Dale said. “I had to grow up and learn to make my decision to be where I felt comfortable.”

At ECCC, Dale earned NJCAA All-American honors, was named the team’s most valuable player, garnered a Second Team All-Region nod and guided the team to the Region 24 championship in 2007 and 2008 and to the NJCAA National Championships.

Her junior college success landed her back in Division I with Conference USA’s Marshall. As a member of the Thundering Herd, Dale averaged 6.9 points and three rebounds per game during the 2009-2010 season, tallying her high mark of 21 points against Central Florida. But her tenure in West Virginia was short-lived as the 5-8 guard felt the pull to move closer to home.

“I think probably the biggest thing that appealed to her was being back close to home,” UWA head coach Craig Roden said. “I think she was tired of being in the mountains of West Virginia and ready to get back close to home.”

The decision to leave Marshall left Dale with a handful of offers, including a pair in Georgia and one in Livingston.

“My parents could come watch me play. My brother and my family could come watch,” Dale said of the greatest appeal UWA held for her when making the decision to transfer late during the summer of 2010.

That decision has produced unbelievable success for Dale, who was second in the nation is scoring following Thursday night’s win over West Florida. Dale entered the weekend averaging 21.8 points per contest, leaving her behind only Grand Canyon’s Samantha Murphy (24.4) in points per game at the NCAA Division II level.

“She can play all five spots. We post her. She’s a good shooter,” Roden said of Dale’s versatility. “She’s a hard person get matched up with.”

Dale’s play earned her Gulf South Conference East Division Player of the Week honors five consecutive times during the UWA’s unprecedented run. Still, even with all the attention given to her scoring prowess — which saw her score seven of the last 10 points in Thursday’s 66-61 win — it is nearly impossible to overlook Dale’s other abilities on the floor. Dale also leads the team in rebounds (7.8 per game), assists (4.1 per game) and steals (1.9 per game).

“We knew she was a good player,” Roden said. “I don’t think anybody realized at that time the impact she would have on this program.”

Dale’s impact, simply stated, has made the program nationally relevant much quicker than Roden, in his second year as the team’s head coach, anticipated.

“It’s also been a thing where all the pieces have fit,” Roden said. “We knew during workouts this summer we were going to be a pretty good ball team.”

As impossible as it is to overstate Dale’s statistical value, Roden believes it is her chemistry with the other eight players on the roster that has really sparked the Lady Tigers’ success.

“It’s been real tough on teams to get matched up with us,” Roden said. “If we don’t have one of those parts, I don’t think we’d be in the position we’re in. It’s like all the instruments are in place and (Dale is) the band leader.”

That chemistry has Dale optimistic about the squad’s potential.

“I think we could make it to the national tournament if we keep working,” Dale said. “We all get along on and off the court. There’s only nine of us.”

Roden has similar hopes, but tempers his expectations given what he has seen on the floor at times during the Lady Tigers’ run.

“We’re like any team. We’ve got our limitations,” he said. “We’ve shown that we’re vulnerable.”

The squad is only two games into the conference schedule, so making such projections is difficult to do. But if Dale continues her hot streak, the Lady Tigers have an opportunity to extend their current 10-game win streak and ride the wave of success onto the national scene quicker than anyone expected. For now, however, Roden is more concerned with the journey than the destination.

“I think one thing being an older coach allows me to do is really enjoy this team in the moment,” Roden said.