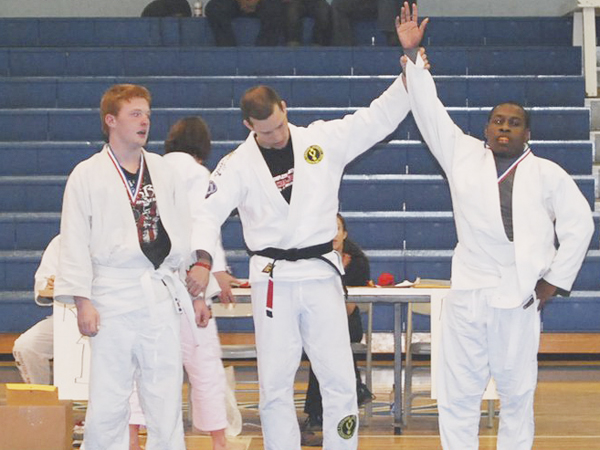 The third annual seminar and tournament brought instructors and martial arts practitioners from all over Alabama and Mississippi as well as from as far away as Virginia for two days of training in submission grappling and Brazilian Jiu Jitsu on Jan. 14 and 15.

“This makes them the only ranked BJJ practitioners in their hometown, and we are extremely proud to have them be a part of the Yamasaki family,” said Cunningham.

Cunningham added that the ranking was approved by his instructors Francisco Neto, Fernando Yamasaki and Mario Yamasaki. He said the Russells’ blue belts certified them to teach the Yamasaki BJJ curriculum and also made them the academy’s official representatives in the state of Alabama.

According to Cunningham, ranking in Brazilian Jiu Jitsu is extremely difficult compared to most other martial arts and is based on a person’s skills during fully resistant sparring as well as his or her ability to explain and demonstrate techniques.

On average, it takes a person from two to four years to earn the first rank, which is blue belt. A black belt rank can take from 10 to 15 years.

“We’re honored that the Yamasaki Academy feels we have progressed enough in our training to achieve blue belt,” said Jay Russell. “This is a big step forward not only for my wife and me but also for our students because we can now offer them ranking in this style.”

“I’ve received more than a dozen messages and phone calls from people who came out and watched or who participated,” said Jay Russell, “and they’ve all been extremely positive. It seems that everybody had a great time.”

Although the women’s division only had one competitor to step forward, Nikki Smith of Ross MA, she earned her first place medals in gi and no gi grappling by participating in exhibition matches against her instructor Ronda Russell.

The men’s divisions were loaded and featured some exciting match-ups between schools.

Tony Brown, of Cross Training Academy, took second in gi and third in no gi grappling.

In the men’s heavyweight beginner division, Hunter Wells, of Ross MA, claimed first in gi grappling and second in no gi grappling as well as kickboxing.

Russell said the event was so successful that plans are already in the works to put on a bigger and even better seminar and open challenge next year.