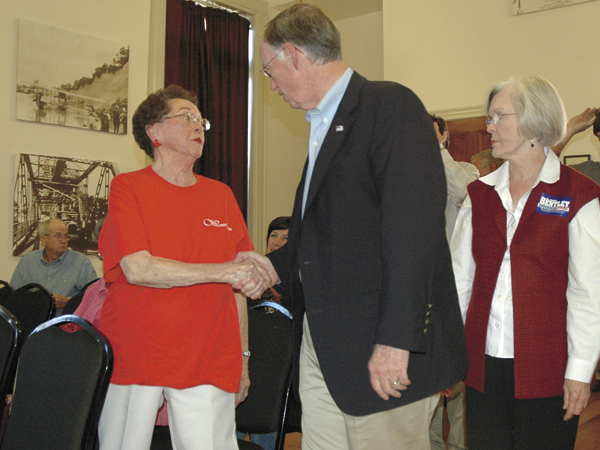 No sooner than he took office did new Governor Dr. Robert Bentley grab national headlines with a controversial religious remark.

“Anybody here today who has not accepted Jesus Christ as their savior, I’m telling you, you’re not my brother and you’re not my sister, and I want to be your brother,” Bentley said during his speech.

The comment has since received tremendous backlash on the national scale, prompting an apology from Bentley just two days later.

“If anyone from other religions felt disenfranchised by the language, I want to say I am sorry. I am sorry if I offended anyone in any way,” Bentley told reporters Wednesday after meeting with leaders of other faiths.

While the comment is one not often heard from elected officials, many were unfazed by the sentiment expressed.

“I did feel like the media took it and ran with it because it wasn’t like he was on the White House steps. He was at a church,” Hank Atchison, pastor of Gallion Baptist Church, said. Atchison pointed out that the context of the comment is important.

Taking into account such a context also means realizing Bentley’s background as a Baptist deacon.

“I think what he said, he believes in,” J.D. Barnes, rector of Trinity Episcopal Church, said. “It was my impression that he let more of his faith slip out there than most people are comfortable with.”

Barnes noted that Bentley’s evangelical background likely had an influence on his Monday speech.

“I think he meant that if you don’t believe in Jesus, you’re not my brother or sister and I want you to be my brother,” Barnes said. “He had some other coments that he made about being a Republican but he was elected to be governor of all of Alabama. That didn’t get a lot of press. The comments about religion were a little bit easier to jump on.”

Atchison said he took no issue with Bentley’s comments, noting that the sentiment itself is anything but negative.

“I think he meant what scripture teaches as far as, if you’re a born again believers and you have the Holy Spirit in you, we are unified in that,” Atchison said. “It’s not a negative thing at all. It’s illustrated to have this awesome picture of a God that loves us. When you really get to the core of the theology behind it, it’s a beautiful thing.”

The difficulty for Bentley is that his beliefs must now mingle with his politics, an uneasy proposition for most.

Barnes stated that one of the keys for Bentley in his political life is to find a way to maintain his faith without alienating those he has been elected to serve.

“He has been elected to be governor of the state and that does include people who are not Christians,” Barnes said, noting a democracy often calls for different rhetoric than a theocracy. “And while he does not need to lose his faith completely, he has to be sensitive to the fact that there are others of different beliefs out there.”