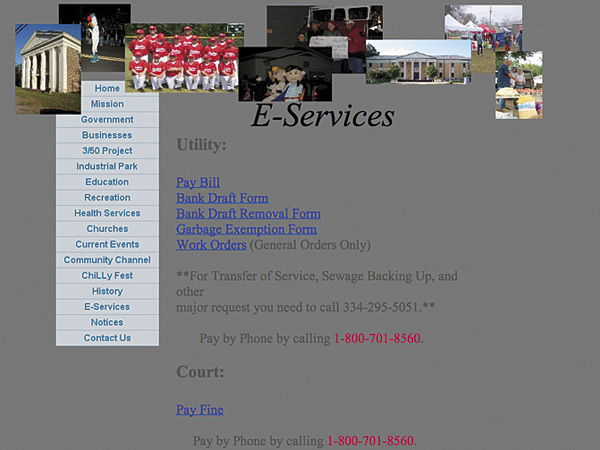 LINDEN – It is a digital age and Marengo’s county seat is doing all it can to keep pace with the world around it. The latest technological advance for the City of Linden is the E-services addition to its Web site.

“We stared the utility pay and the court fines first. This will be our second year doing that,” Linden City Clerk Bruce Ward said. “Probably a month or two ago, I added the garbage request forms.”

The services offered on the city’s Web site have continued to expand, making most of the day-to-day tasks involving City Hall executable via the internet.

“The accident reports will be coming soon, probably by the end of this week or the beginning of next week,” Ward said of another service which will soon be available at lindenalabama.net/eservices.

For that service, the city is using the company utilized by the Demopoils Police Department, which made its accident reports electronically available earlier this month.

Of the services currently available, Ward said individuals can pay a water bill online for a minimum process charge.

“All you need to do to pay a water bill is have your account number,” Ward said. “You can go on here and just view your amount if you don’t know it.”

The bank draft forms are free of charge while accident reports will cost $15.

“The payment system for the utilities is really great,” Ward said. “I’m surprised at how many people use that. Hopefully the garbage exemption and work orders will pick up.”

While Linden offers an abundance of services on its Web site, there are a number of basic functions which still need to be handled by individuals on a face-to-face basis at City Hall.

Linden citizens will not be able to use the city’s Web site to set up accounts, pay late fees or reconnection fees, report sewage backup or dirty water, transfer accounts or obtain a business license, among other things.

But the current list of E-service offerings along with other areas of the domain have helped make the small town’s Web site a local hotspot.

“I think people are using it. I added a counter about mid-November and since then, we’ve had 2,044 hits to date,” Ward said. “The Facebook page is at 544 fans now too. People are going to it as well.”