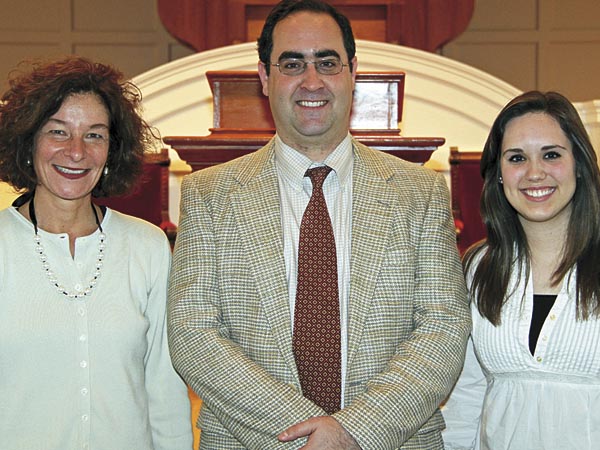 Though the whining of children can be annoying, a Beeson Divinity School professor believes the God of the Bible encourages his spiritual children to whine.

He spoke in daily convocations from the Psalms.

“The Psalms are fundamental to our lives as God’s people,” Gignilliat said. “They encompass the full spectrum of human emotions and let us know it’s OK to feel despondent at times.”

Gignilliat, who’s taught Old Testament at Beeson since 2005, noted that about 70 percent of the Psalms are “laments,” or “woe is me” narratives in which writers complain about their lot in life and often accuse God of not caring about them.

“I wish it were true that, as the old gospel song says, ‘Every day with Jesus is sweeter than the day before,’” Gignilliat said, “but faith often clashes with real life.

“We might even say that God hurts his friends, unfortunately. Disappointment, brokenness and death are part of every life and we often don’t understand the purpose.

Gignilliat used Psalm 73 as his text on Jan. 18, and said that the writer was disappointed that evil people were prospering while he wasn’t.

“But the writer did the right thing—he went to the sanctuary to worship God. There he received a revelation,” Gignilliat said.

“He learned about ‘the end.’

“At the end of our days, the righteous will be with God and the wicked will come to naught.”

The lament psalms teach us to be honest in our prayer life, he said, and give confidence that God isn’t offended by our humanity.

Gignilliat earned degrees at Bob Jones University, the Reformed Theological Seminary and his Ph.D. at the University of St. Andrews in Scotland. His New Testament doctoral study was about Paul’s use of the Old Testament prophet Isaiah.

The opportunity came to work at Beeson as professor of Old Testament and Hebrew, but Gignilliat said that the shift to the Old Testament wasn’t as seismic as it might seem.

Gignilliat said he had a “vested interest” in the Old Testament, and was sad that so many Christians seem to think it’s irrelevant to them.

“The Old Testament is the Bible Jesus used, and the only one the early church had for many years,” he said.

“But the early church used it effectively in their life and work. Jesus told them that the Old Testament—‘Moses and the prophets’—testified of him (Luke 24: 27), so the Old Testament is also the story of Jesus.”

Gignilliat conducted a pastors’ seminar on the afternoon of Jan. 18 that was co-sponsored by the Office of LeaderCare and Church Administration of the Alabama Baptist Board of Missions and the Resource Center for Pastoral Excellence at Samford University.

Gignilliat gave an overview of Isaiah and suggested preaching themes to the pastors, declaring Isaiah has been called “the prince of the prophets” for good reason.

“Isaiah very clearly demonstrated that the promise of a king after the order of David would be realized in Jesus, the suffering servant,” he said.

“Isaiah gives us four servant passages in which the focus shifts from Israel as God’s servant to the one who ‘was wounded for our transgressions,’ and indeed experienced death in order to bring redemption to the world.”

In his concluding lecture in Psalm 103, Gignilliat said that the psalm had both a maudlin and a triumphant theme.

“The writer said ‘all flesh is grass,’ and this means we’re all fragile and we all die,” he said.

“But the good news is that God remembers us. This doesn’t mean that he’s absent-minded. Remembering means that God is about to act in order to benefit his covenant people.

“And what God does for us is to ‘remove our transgressions as far as the east is from the west’ and ‘redeem our lives from destruction.’”

Gignilliat said the only response believers can have is to “bless the Lord” even in times of despair.

“Praise for God is the sum total of the Christian life,” he said, “and according to Revelation 4, worship and praise will continue in heaven.”