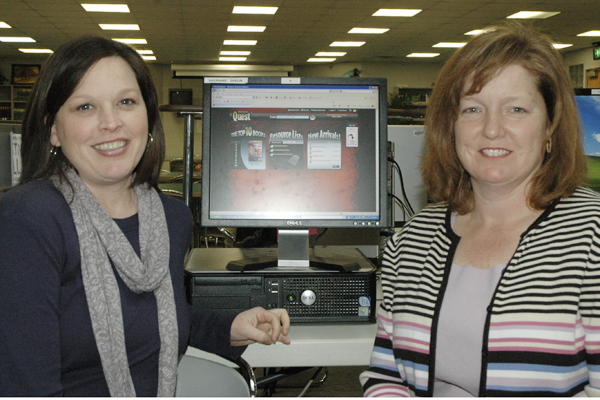 The libraries of Demopolis City Schools have become just a little more accessible thanks to a grant from Alabama-Tombigbee Resource Conservation and Development.

The grant, which was applied for by DMS librarian Ginger Godwin and DHS’s Cynthia Whitlock, allowed the libraries to switch from Athena to a new automation system, Destiny.

“There were problems with Athena that we could not straighten out,” Godwin said of the need for a new system.

“It has been at least four or five years since they stopped updating Athena,” Whitlock said. “A lot of the things that I formerly had to do by hand, it automatically updates.”

The web-based system allows student readers to browse books without ever having to leave their seats.

Destiny affords students the opportunity to search for specific titles, genres or topics and even determines how many copies of a particular book are in stock. It also shows the cover of most of the books in the system in a format reminiscent of Amazon.com.

“That’s another thing I like about it is that it shows the cover for most of the books,” Whitlock said. “For the kids that attracts them in.”

Destiny provides a number of reviews and synopses for each book, allowing students to determine quickly their interest in a particular read.

“My kids seem to like it,” Godwin said. “One of my kids keeps asking, ‘When are you going to make it to where we can have our own account.’”

Destiny holds the capacity to allow each student to possess an individual account. That account will allow readers to add books to a reading list, making library visits quicker and eliminating the need for delay in book selection.

“The kids do ask a lot for book recommendations,” Whitlock said. Destiny Quest provides a quick list of recommendations for those in search of their next great read.

Additionally, teachers at Demopolis Middle School have the option of using the system to search state-specific standards and find materials correlating to those measures.

“It’s going to have the capacity to have E-books,” Whitlock said, referring to electronic books compatible with devices such as Kindles or Nooks. “We’ll have that capacity soon. Probably not this year, but maybe next year.”