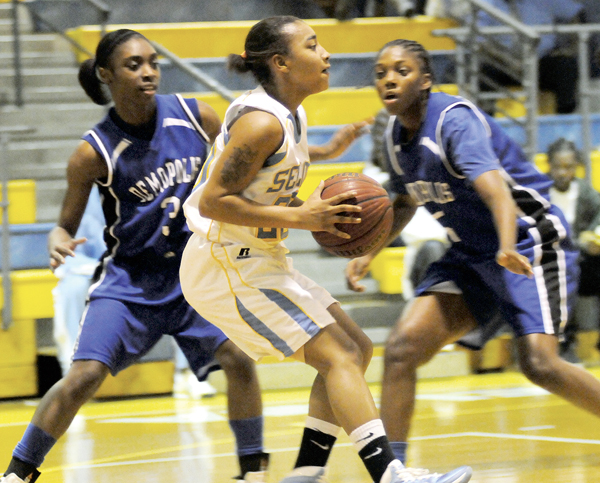 SELMA — Lady Saints head basketball coach Anthony Harris sat on the bench, looking out on the court as some of his players were being recognized to the Class 5A Area 5 all-tournament team.

The sweat on his brow said it all if he didn’t. He had to work hard Monday night and his Lady Saints had to work even hardER to pull out yet another area championship.

“That was tough tonight,” Harris said, looking up at the scoreboard signaling the Lady Saints’ 33-24 win over rival Demopolis. “We had to come from behind and beat a very good team tonight to claim this title.”

The win now gives Selma home court advantage in the sub-regional game, set for Thursday against Eufaula. The game is set to tip-off at 7 p.m.

Selma trailed throughout the first half of the game and most of the third quarter until the Lady Saints began pounding the ball inside and getting to the free throw line.

Selma outscored Demopolis 9-3 in the first five minutes of the third quarter to tie the game at 17 with 3:07 left in the quarter. That would be the last tie of the game.

“I had to remind the team that we were 26-3 coming into this game and were playing at home and we needed to start playing like it,” Harris said. “We finally settled down and began playing like we were capable of.”

The Lady Saints trailed 14-8 at halftime and were held scoreless in the second quarter by a tough Lady Tiger defense. But, Demopolis was unable to capitalize on their second quarter shutout, scoring only two points themselves.

This marks the sixth area title in the last eight years for Selma. The win improves the Lady Saints record to 27-3.

Demopolis’ Corneshia Perkins and Shadijia Moore each scored eight points to lead the Lady Tigers, who now must travel for their sub-regional game.