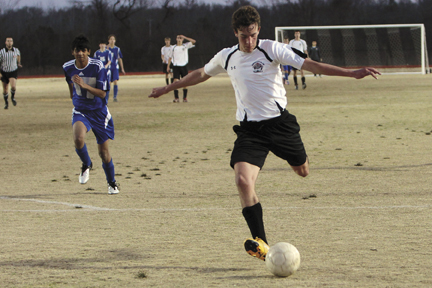 Cameron Fendley opened the scoring early in the first half with an assist from Tyler Howerton. Minutes later, Fendley found the net for the second time when he chipped in a ball off an assist from Jake Flowers.

“Jake Flowers impressed me tremendously,” Demopolis head coach Peter Keen said of Flowers, who made the first start of his high school career Tuesday. “Not only in his attacking, but he defended well.”

Fendley continued his scoring onslaught soon thereafter with a third goal, picking this one up off an assist from Howerton.

Fendley added his fourth and final goal moments later when he blasted a shot in off an assist from Jacob Roemen, stretching the lead to 4-0.

Demopolis capitalized on six of its 11 shot attempts in the game’s opening half, finishing the night with a shooting percentage just shy of 50.

The second half saw Roemen add a second goal, finding the Tigers’ seventh point off the assist of Jarvis Lawson. Roemen then assisted freshman Oscar Valdivia for the first goal of his high school career.

Trey Williams later tapped in a rebounding ball for the final score of the game.

As impressive as the Tigers were offensively, it was the team’s defense that most caught Keen’s attention.

“They’re not just standing in a formation,” Keen said, pointing out that his team showed a sharp understanding of the Demopolis defensive scheme.

The win also allowed Keen to experiment with his lineup, utilizing multiple players in various positions.

The Tigers will return to the pitch Wednesday at 6:30 p.m. to face Robert E. Lee High School. That contest coupled with Monday’s victory are designed to provide the Tigers a warmup for this weekend’s Cane Cup tournament in Mobile.