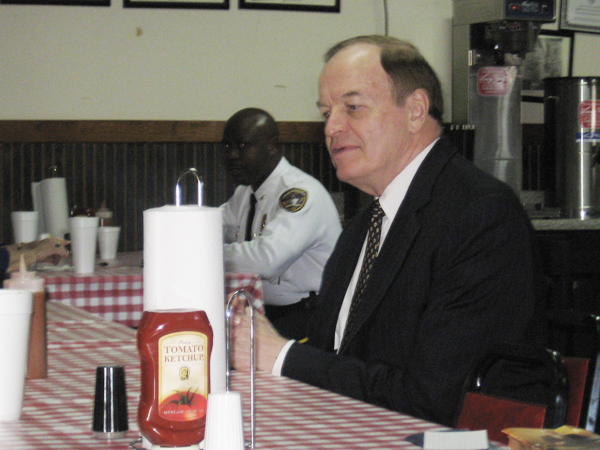 As the nation slowly works to free itself from the doldrums of recession, Senator Richard Shelby told a group gathered at Smokin’ Jack’s Barbeque in Demopolis Saturday that the federal deficit was the nation’s single largest problem.

“We’re on the road to financial destruction,” he warned.

Shelby said discretionary spending should be looked at first to lower the national debt, but all programs, including defense and entitlements, should be on the table in an effort to reduce out of control spending.

“We need to look at every program and ask, ‘Why did we create this?’,” he said.

Shelby noted that Social Security is currently sound but major financial doubt looms for those who still have many years to go until retirement.

“If you’re drawing social security now, you’re fine,” he said. “If you’re going to retire in the next few years, you’re probably going to be fine.”

“Now this family right here,” he said pointing to couple with two small children, “it’s probably not going to be around for you. And for these kids, it’s even less likely.”

“I don’t want the government in charge of healthcare,” he said. “Governmental operations don’t tend to be the most efficient…and I don’t think the government needs to be in the healthcare business.”

Shelby said he already thinks the United States has “the best healthcare system in the world”, adding that he sponsored a repeal of what he’s termed “Obamacare” due to the government’s proposed role in healthcare and because, “it didn’t do anything to really fix the problem. We need to replace it with sensible reforms that focus on lowering costs, improving access and strengthening the doctor-patient relationship.”

Shelby’s Demopolis visit was part of his Town Hall Tours, which has seen more than 1600 stops since Shelby’s initial election to office in 1987.