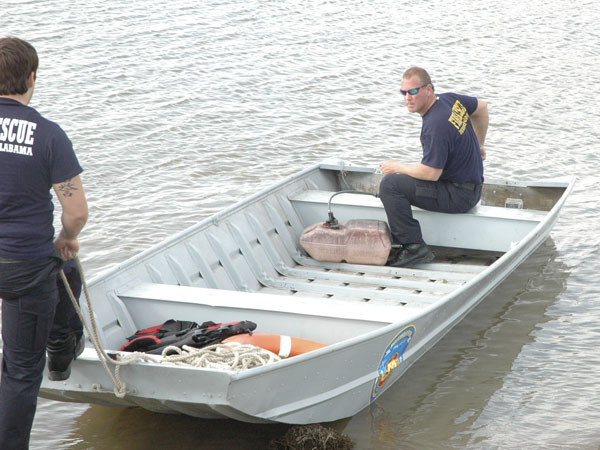 A simple aquatic training exercise by the Demopolis Fire Department at the city landing Monday drew moderate attention from passersby.

The exercise was a designed refresher of sorts for the department’s boat operators, whose skills need to be at the ready as warmer weather increases recreational traffic on the Tombigbee River.

“They were actually going out and trying to get the basics (of water vessel operations),” Assistant Chief Carl Johnson said. “It’s getting the time of year to make sure the boat runs and you’ve got some guys on each shift able to go out and help people.”

As adept as fire department officers need to be on land, DFD officials see an increasing need for its department to have adequate aquatic training.

The river is a popular recreational spot for locals and visitors alike. That compounded with commercial traffic as well as events such as Christmas on the River and Freedom on the River, as well as the ever-growing popularity of the Demopolis Yacht Basin, increase the probability of on-water incidents or mishaps.

“Most of the people that are local know the area and don’t have many problems,” Johnson said. “But we’ve had tragedies here on the river.”

In light of recent events and the potential for future occurrences, the department aims to be as prepared as it possibly can in the event its services are needed.

“We have several boat operators. They have their vessel license,” Johnson said.

That training has come in handy for the department in the past. In 2010 the department was called to one incident in which a boat capsized in the lower pool. It was the DFD’s readiness that enabled it to quickly reach the vessel’s passengers.

Other incidents over the years have seen everything from fuel spills to a jet ski going over the dam.

In addition to having its members ready to serve as boat operators, the Demopolis Fire Department is also weighing the merits of reactivating its nearly defunct River City Underwater Rescue Team.

That dive team took its roots in the 1990s and saw participation from volunteers and fire department officials alike.

“We had an upstanding citizen here that used to do all the recoveries for the drowning victims. He got to where he wanted to pass the responsibility on. The city gave us the money to get certified,” Johnson said. “We did extensive training on maneuvering in the water and search tactics. We’ve actually had several incidents where we’ve recovered bodies.”

Johnson understands public funding is at a premium under current economic conditions but is hopeful grant funds may be made available for the effort should the department and city determine they are needed.

“We would love to have everyone certified SCUBA. It gives us a little more versatility too,” Johnson said before noting the difficulties which would lie ahead for such an endeavor. “Swift water rescue is not being offered at the fire college anymore.”

While the challenge in both funding and execution would be formidable, the department’s ability to provide rescue services in an aquatic arena would enhance the city’s preparedness for apparent forthcoming growths such as the yacht basin expansion and the proposed Port of Demopolis project.