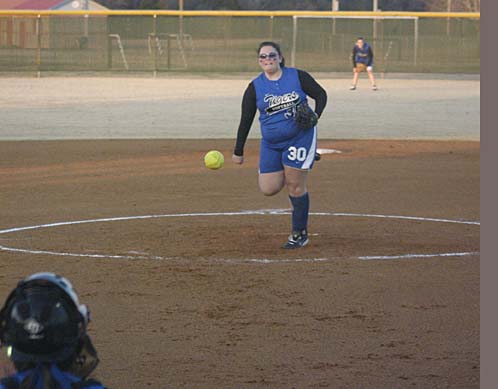 Demopolis Middle School (0-1) ran into some difficulties Monday, suffering a 10-0 loss at home in five innings in its season opener.

“I didn’t get what I expected out of my girls,” head coach Charles Jones said before adding that his team’s recent practices have been hampered by unfavorable weather conditions. “We’ve only had about seven practices outside on the dirt.”

The lack of practice time has served to underscore the team’s inexperience at the middle school level.

Still, Monday’s setback was not without its bright spots as Jones saw positives at a handful of positions, citing the relief of seventh grade pitcher Hannah Harmon among that list.

“Second and first base were pretty good. They did well,” Jones said. “Second baseman Cameron Thomason hit the ball well and then play pretty well at second base and just moved here there three days ago. “

Thomason’s day included a leadoff triple in the fourth that gave Demopolis its best chance to score.

Jones is confident improvement will come for his squad.

but offers that the road ahead scarcely softens for his young team.

“We go to Brookwood Saturday,” Jones said. “It’s going to be a real tough schedule.”