The Port City of the People? 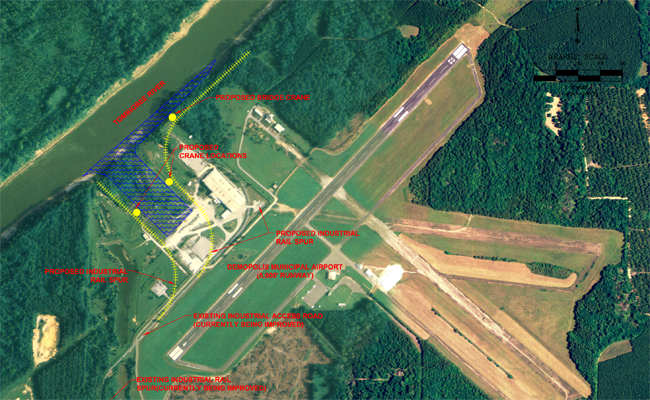 Industrial, business and city leaders spent the early part of this week speaking with federal legislators and asking for support for the Demopolis Intermodal Complex.

The complex, in which the Port of Demopolis would become one of the key anchors of the Airport Industrial Park, would offer rail, air, road and waterway access and become a hub for such activity across the Southeast.

Once completed, the Demopolis facility would be one of only three in the state with such capabilities.

“It would be a complete game changer,” Demopolis mayor Mike Grayson said, “in the jobs it could provide and the opportunities it would create.”

In December, the City of Demopolis committed $21,000 in funding to the Industrial Development Board who has retained a Nashville firm to develop a strategic plan on how to best design and implement a port in the city.

“I’ve heard and I’ve read that when it comes to developing a port, for every dollar you put in, you can expect to get about seven out,” he said. “Now, you can’t flip a switch and say ‘Where’s my check’, but that kind of return spread out over a few years in tax dollars and jobs and sales taxes, would mean a lot to Demopolis.”

A Marengo County delegation spent the better part of Tuesday meeting with Congresswoman Terri Sewell and her staff and the staffs of Sen. Jeff Sessions and Sen. Richard Shelby in Washington D.C.

“I was excited,” IDB chairman Mike Marshall said. “The reception was even better than what I could have imagined.”

All told, the Complex will be an estimated $32 million investment.

Marshall, Grayson and Marengo County Economic Development Authority Director Debra Fox left Washington D.C. without the funds, but with hopes higher than ever before.

“I was encouraged,” Fox said of the meeting. “We all seem to see the benefit and what it could mean for the region.”

The group presented the federal delegation with a 34 page presentation, which documented virtually every facet and need of the Demopolis Intermodal Complex. Included in that report are letters of support from key local and state officials as well as some of the heaviest hitters in the private sector like RockTenn, Alabama Power, Alagasco and Norfolk Southern.

“Having their backing is important,” Fox said. “That they have identified this project as one they would get behind is a huge show of support.”