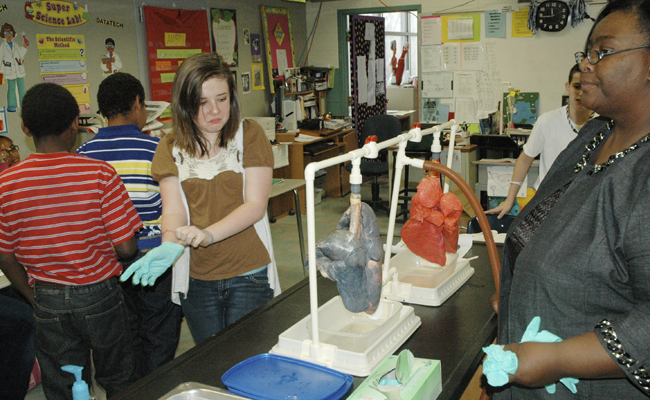 The Tombigbee Healthcare Authority’s TEMPO program, in conjunction with the Alabama Department of Public Health’s Tobacco Branch and the Coalition for a Tobacco-free Alabama, conducted an observance of Through with Chew Week to wrap up February.

The program allowed TEMPO (Teens Empowering and Motivating their Peers to Opt-Out) to conduct a series of events to raise awareness about the dangers of the use of chewing tobacco.

“I think they were very responsive because they got an opportunity to visually see the effects of dipping and chewing as far as what it does to the lungs and the mouth,” TEMPO project manager Loretta Wilson said.

The program allowed TEMPO coordinator Denise Williams to take lifelike models of a healthy lung, a damaged lung and a mouth stained from years of tobacco use to sixth grade classes at Demopolis Middle School.

“I think that it was a huge impact,” Wilson said of the program. The presentations allowed students to study up close the impacts of chewing tobacco usage.

Students at DMS were also afforded the opportunity to participate in LifeSkills training sessions as well as to receive arm bands and booth displays.

The TEMPO program currently does work in DMS, Demopolis High School, John Essex and Linden’s George P. Austin Junior High. Wilson said the program is hopeful it will soon add Sweet Water and A.L. Johnson to its list of schools helped prior to the June conclusion of its current initiative.

“We hope to get into those schools before the program ends in June of this year,” Wilson said.

Of the schools currently working with TEMPO, Wilson said support from administrators and teachers has been high.

“We’ve had really good reception from all the schools we’ve worked with,” Wilson said. “The school staff has been very supportive by writing letters of support to help secure funding. When schools allow you to come in and take up two hours of their kids’ time, that is support within itself.”