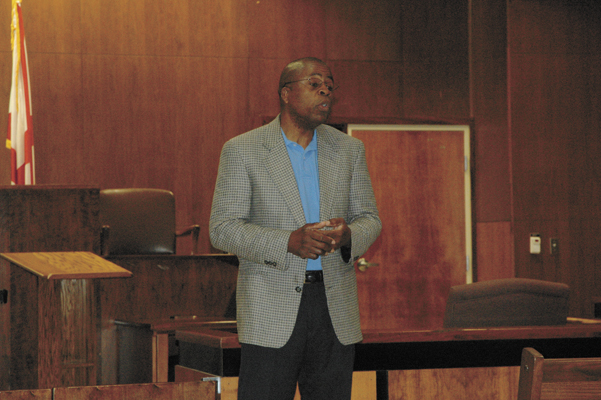 LINDEN – The city moved one step closer to Wi-Fi connectivity Thursday evening when Wayne Green of Blackbelt Technologies met with community members at an open forum.

The meeting was designed to serve as an educational dialogue between Green and community members as Blackbelt Technologies has forged a partnership with the City of Linden.

That partnership will produce four wireless internet hot spots around the city as the company attempts to develop the technology in rural areas.

“Phase I at the Whistlestop should be up and ready to go next month,” Green told attendees.

The Whistlestop Cafe will be the first of the four hot spots with three others following to include City Hall and two other local restaurants.

“The way we are going to do the library is set up the antenna on top of City Hall,” Green told a citizen who inquired about achieving wireless internet connectivity at the Marengo County Library.

According to Green, Blackbelt Technologies will provide the equipment and service to the city for no cost during its trial period.

“If I am going to sell a concept to someone, they are going to have to touch it, see it, feel it, taste it and understand it,” Green said of his reasoning for providing the service with no initial cost. “We want this technology in these areas and we want to be the ones to push that technology.”

The initial phase of the project will primarily serve Linden residents, who will need to obtain a password to access the network. However, Green pointed out, there are opportunities that lie ahead for additional technologies to benefit municipalities such as the Linden Police Department.

“The residential part is good, but the municipal use is great,” Green told the small crowd gathered in the Marengo County Courthouse.

Green also pointed out that certain measures of security will be provided during the initial phase of the project.

“There will be some firewalling and some security in place,” Green said. “Access to certain sites will be prevented during the initial phase. We prevent certain things.”

Green pointed out the company aims to have all four of the hot spots set up by the beginning of the summer.

“If everything goes well, we’ll have all four of them up by the middle of June,” Green said.

One of the hang-ups the company has encountered centers around the use of a different, less expensive type of equipment. Green said the company is acquiring such equipment in an effort to cut operational costs. For the business model Blackbelt Technologies is utilizing, providing affordable services in rural areas is crucial to success.

“If we can drive the cost down 50 percent, that means services can be rendered to residents at 50 percent less,” Green said.

“I’m thrilled just to be able to bring another level of technology to Linden,” Mayor Mitzi Gates said.

“Especially with this trial period and partnership, we want to make (wireless internet access) as available as possible.”

The company will work to have the first hot spot installed by April while Green and city leadership continue to hold additional meetings.

“The next step, we need to have additional meetings to kind of project out what we’re going to do and what we need to offer,” Green said.