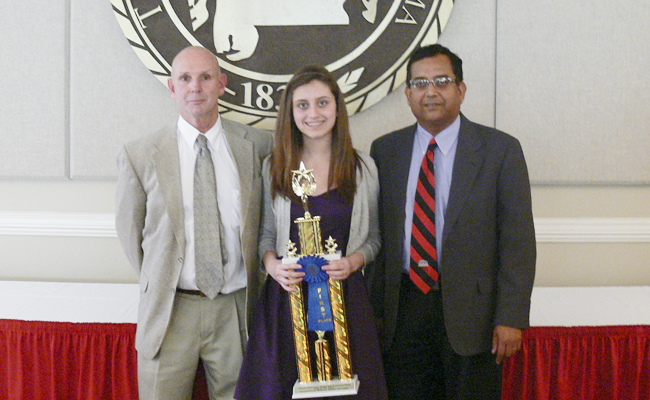 Rachel England’s science project, a study of mussels in Alabama, won first place in her division at a regional science fair recently, which qualifies her for the International competition.

The effects of the BP oil spill barely made much of an impact on Marengo County. However, it made a resounding impact on one Demopolis High School freshman.

Rachel England’s science project, a study of mussels in Alabama, won first place in her division at a regional science fair recently, which qualifies her for the International competition.

She was awarded First Place in the Environmental Science category for Senior Division and First Place Overall for the University of West Alabama Regional Science Fair.

Rachel’s scientific exploits are well known in the halls of DHS but she said the advanced levels of competition are where things get heated and the games really begin.

“In school, there are a lot of guidelines and everyone’s projects are similar,” she said. “In the regionals, it’s all free style.”

Aside from the accolades, England said one of the most rewarding parts of the projects was a deeper understanding of the state’s native mussels.

“Before I did my project, I really didn’t know about mussels and what they did,” she said. “Like, I didn’t know there were 180 different species and that a lot of them are endangered and dying.”

With what appears to be a bright future as a marine biologist has already been put on hold for other career aspirations.

“Either a microbiologist or a surgeon,” Rachel said of her career plans.