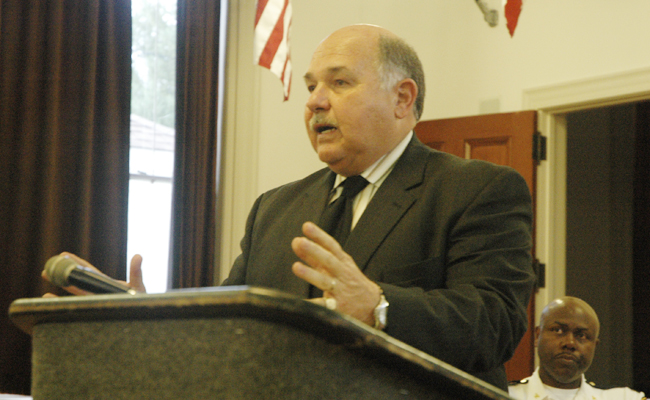 The session, which was designed to allow for interaction between city leadership and citizens about the direction of Demopolis, saw much of its attention paid to the proposed port that would be an effort to utilize the city’s location on the banks of the Tombigbee River.

“We are a very blessed community,” Grayson said among his opening remarks. “This city is blessed with two thins. No. 1, the people. No. 2, we’re blessed with natural and man made assets.”

As the session turned to an open discussion, most questions were related to the proposed port.

“The big game-changer will be the Port of Demopolis,” Grayson said. “We’re poised to be able to make a difference. If we consider it an investment, it will pay off for us. It will be a game-changer, but don’t expect it to be an overnight game-changer.”

Grayson outlined some of city leadership’s plan to make the proposed port into a reality, but continually reiterated that undertaking such a project is not without obstacles and should be considered an investment.

Phase one of that projet, according to Grayson, woud be to obtain control of the property in question.

“If we’re going to do this, we want to make sure we are the beneficiaries of this investment,” Grayson pointed out.

Other topics discussed at the session included finding ways to support the city’s existing assets.

Also among Grayson’s talking points was the necessity to open Demopolis up to new businesses.

“We’ve got to be business friendly in this town,” he said.

Grayson also told the audience of a joint stance between himself and the mayors of Thomasville, Northport and Tuscaloosa.

“It is our opinion Highway 43 should be four-laned all the way up to the interstate in Greene County,” Grayson said.