Man of many hats 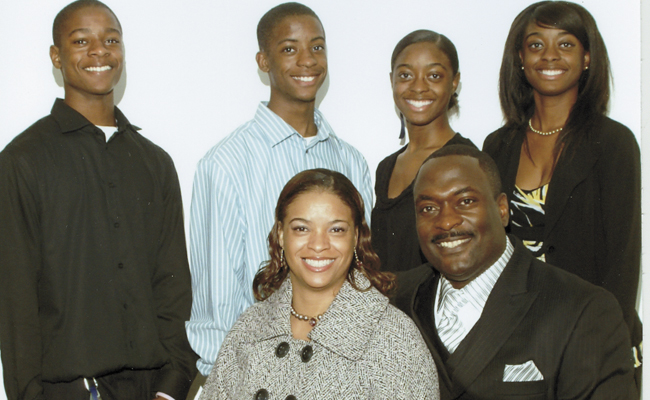 An Aliceville resident, Simon spends most of his days across the state line in Mississippi.

His daylight hours are spent supervising as a contract worker for the United States Air Force.

“My job is to make sure I have planes ready to be flown by the best pilots in America,” Simon said of his supervisory role on Columbus Air Force Base.

Simon clearly enjoys what he does. And by all accounts, he is pretty good at it.

But as important as it is to make sure planes are safe and ready for U.S. Air Force pilots, Simon possesses no fewer than two other jobs he considers even more vital than the one he spends his daylight hours doing.

The job he has had the longest is that of family man. He serves as a devoted husband to his wife Renee. And he is a loving father of five, oldest daughter Jelisa, twin 18-year-old girls LaTira and Jakira and twin 15-year-old sons Deonte’ and Devonte’.

He has also recently embraced the role of grandfather as Jelisa brought her first child into the world not too long ago.

But there is another job the Ezell Simon fills each day, one that he accepted in December and has managed to balance with all of the other demanding facets of his life. That job sees him serve as pastor of Morningstar Baptist Church.

“It has been a very, very awesome experience just enlightening to be around people with the same mindset,” Simon said of working alongside the members of Morningstar. “Really enjoying the people and it has really been inspirational.”

Simon and his family were welcomed warmly by the members of the Morningstar church, a group that is rich in history.

“It’s a privilege and really, I’m very humble to be at Morningstar,” Simon said. “Just being a pastor there, I feel privileged and honored to be a part of the history of the church. It’s a growing area with so many ministry opportunities.”

But as impressed as Simon is with the church’s history, it is the direction of the work in which he finds the most joy.

“What fulfills me is everybody has been willing to follow leadership and to move forward in ministry,” he said.

The church is the second pastorship Simon has accepted, previously working in Carrollton.

“I pastored 12 years in Carollton, Alabama. That’s where I really got my roots as far as ministry and developing ministry,” Simon said.

He began moving in the direction of pastoral work some 14 years ago. He has since assisted in the work in Aliceville and studied at Samford University and Selma University. A path that led him through Carrollton now has him working in Demopolis while juggling responsibilities at home in Aliceville and Columbus, Miss. So how exactly does one man manage to keep up with it all?

The answer, he says, is part his approach and part someone else’s support.

“Much prayer. Much patience. I really have to be proactive in everything I do,” Simon said before stating that the foundation of success lies somewhere greater than himself. “I know that I wouldn’t be where I am now if it wasn’t for the strength of God.”