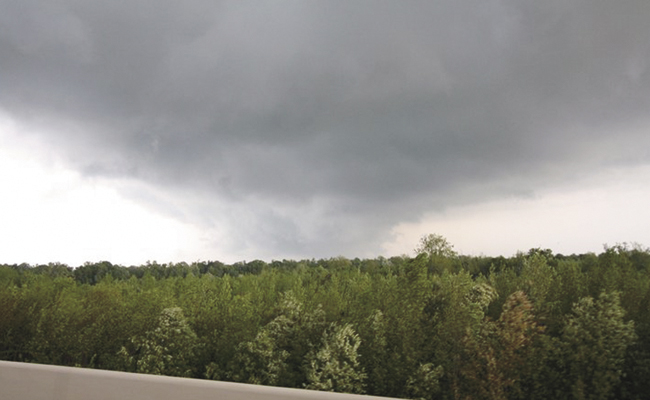 Pictured above is a mesocyclone from the bridge on Highway 80 West over the Tombigbee River. - Jeff Russell - KDR Media Group

The National Weather Service (NWS) is still working to determine specifics on a tornado outbreak Friday that killed a Marengo County man, injured four others and destroyed multiple homes and buildings.

Wes King, 96, of Myrtlewood, was killed Friday evening when what the NWS determined to be an F3 tornado plowed through the town and destroyed his home. An F3 tornado carries with it winds between 158 to 206 miles per hour.

Evaluators with the NWS were still investigating sites across the county yesterday and have yet to determine the overall number of tornados that touched down or their classifications.

A tornado that touched down in Dayton was classified yesterday afternoon as an F2, with winds estimated between 113 and 157 miles per hour.

Information is expected to be available later this week from storms in Calvary, Octagon, Nanafalia, Jefferson and Beaver Creek.

According to Marengo County EMA Director Kevin McKinney, at least 26 structures were destroyed in Friday’s outbreak with at least 12 more suffering major damage.

“There was a storm spotter in Nanafalia who got the first tornado on video,” McKinney said.

“And there was a sheriff’s deputy in the Bever Creek community who actually witnessed that one. (The NWS) will have to determine how many tornados actually touched down.”

The majority of the damage was concentrated in the Myrtlewood area, where 14 structures were destroyed and three more damaged.

McKinney met with Congresswoman Terri Sewell Tuesday afternoon at the Demopolis Higher Education Center where Sewell committed her support in securing federal aid to help the affected residents in the impacted communities.

“My office will continue to work with federal, state and local officials to ensure that we are doing all we can to get people the resources and assistance they need to rebuild their communities after these storms,” she said.

McKinney said Sewell’s support will be vital in getting the residents the form of help they need from the Federal Emergency Management Agency (FEMA) now that they find themselves without permanent residence.

“There’s no state or local resources for these people,” he said of the victims. “(FEMA) is all they’ve got. Without (the help of FEMA), these people are homeless.”