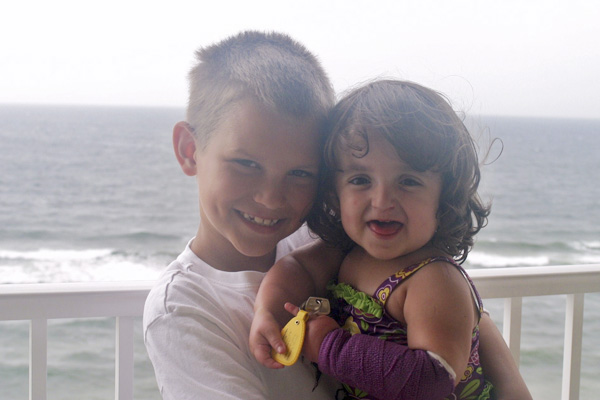 Rhae Busby looks and acts like your typical All-American three year old little girl. She giggles. She talks. She likes to color and play with her big brother, Aidan, and her dog, Lucy.

What makes Rhae different is on the inside; namely the evidence of the more than 140 bone breaks she’s endured since birth.

“As of two days ago, 142 that we know of,” her mother, Dana, said. “She’ll break things like ribs and small bones that we may never know about. We’ll find out about them while we’re getting other breaks X-rayed and they’ve already started to heal.”

In the United States, the incidence of osteogenesis imperfecta is estimated to be 1 per 20,000 live births. For comparison, for every child diagnosed with OI, nearly 20 are diagnosed with autism.

As such, OI is considered a rare disease and rarely sees the awareness campaigns of other, far more common diseases.

Friday, Demopolis will recognize Wishbone Day; a day set aside to raise awareness about OI and those who deal with it on a daily basis. Dana said the day is important to her and her daughter because it shines the light on a disease that is often overlooked.

“It’s getting more awareness out there for my child,” she said. “She’s one of the few in this area that has it and I want everyone to understand OI and know about it. People with OI are normal just like anybody else.”

In recognition of Wishbone Day, people are encouraged to wear Wishbone Day T-shirts, which were pre-ordered by the Busbys last month, to work or to school Friday. Those without a Wishbone shirt are asked to wear yellow.

As for Rhae, Wishbone Day is her opportunity to spread awareness about a disease she beats on a daily basis by simply hopping out of bed and playing with her toys.

“Up until about five minutes before delivery the doctors told us that she would never make it,” Dana recalled. “But here she is, as happy as can be.”

Rhae’s long-term prognosis isn’t known. Doctors continue to watch the development of her chest, which could later lead to respiratory complications.

In the interim, Dana said Rhae is fine and hopes things like Wishbone Day raise enough awareness for OI that Rhae can see a cure or treatment for the disease be found.

“I want OI to have the same kind of awareness that cancer has,” she said. “And I want people to understand what the disease is. My kid’s going to have a very productive life. These kids are smart and grow up to be very productive adults.”

At present there is no cure for OI. Treatment is aimed at increasing overall bone strength to prevent fracture and maintain mobility.